In a statement he read to TV news channels, Mr Stephenson said he had no knowledge of the extent of phone hacking allegations at the now defunct News of the World newspaper, owned by News International, part of Rupert Murdoch's News Corp media empire.

Britain's police have been criticised over allegations of accepting money from News of the World and other newspapers and of not doing enough to investigate phone hacking allegations.

Paul Stephenson said, 'I have taken this decision as a consequence of the ongoing speculation and accusations relating to the Met's links with News International at a senior level and in particular in relation to Mr Neil Wallis who as you know was arrested in connection with Operation Weeting last week.'

Mr Stephenson said he did not want criticism of his conduct to detract from ensuring security at the Olympic Games, which are due to be held in London next year.

Earlier, Ms Brooks, the former head of Rupert Murdoch's UK newspaper business, was arrested in the latest twist of a phone-hacking scandal that tainted British police and politicians and shaken the tycoon's global media empire.

Several sources familiar with the situation have said Ms Brooks, 43, was being questioned as part of an investigation into allegations of illegal voicemail interception and police bribery at the News of the World tabloid she once edited.

Ms Brooks quit as head of News International, the British unit of Murdoch's News Corp , on Friday, but has denied she knew of the alleged hacking of thousands of phones, including that of a murdered schoolgirl.

The revelations have raised concerns not only about unethical media practices but about the influence Mr Murdoch has wielded over successive British leaders and allegations of cosy relationships between some of his journalists and the police.

With politicians from Australia to the US demanding to know if similar abuses occurred elsewhere in Mr Murdoch's global media business, the 80-year-old has been forced on the defensive and the position of his son James as heir-apparent has been called into question.

In Britain, Prime Minister David Cameron has come under fire for his friendship with Ms Brooks and for employing another former News of the World editor, Andy Coulson, as his press secretary even after Mr Coulson had quit the paper in 2007 following the jailing of a reporter for phone-hacking.

Ms Brooks and Rupert and James Murdoch are due to be questioned in Britain's parliament on Tuesday, including over reports that News International misled parliament during earlier hearings.

But Ms Brooks' spokesman David Wilson said her arrest may cast doubt on whether she could appear before politicians.

Her spokesman said 'I think there will clearly be some discussions between her lawyers and the select committee on whether it is still sensible for her to appear.'

David Wilson added that she was 'shocked' by the arrest.

He continued 'Anything that will be said at the select committee hearing could have implications for the police inquiry.'

Adrian Sanders, a Liberal Democrat politician who sits on the parliamentary media committee, questioned the timing of the arrest and said he hoped it would not scuttle the hearing.

Sanders said 'if this is designed to take the spotlight off the police, at the same time as in a sense giving a shield to Rebekah Brooks, that's a very serious matter indeed.' 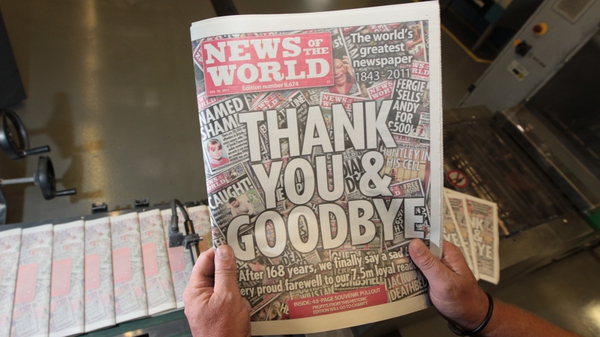 Murdoch in London over hacking scandal