The Office of the Data Protection Commissioner has contacted mobile phone companies here about the possibility of removing remote access to voicemail.

The move comes in the wake of the phone hacking scandal in Britain, which has already led to the closure of the News of the World.

The newspaper is accused of accessing private messages, by using a default pin to dial into mobile phone voicemail.

In Britain, the scandal continues to have repercussions and newspapers there are carrying full page apologies this morning from the Chairman of News Corporation, Rupert Murdoch, for the ‘serious wrongdoing’ of the News of the World.

In the ads, he says he is ‘deeply sorry’ for the hurt caused to those affected by phone hacking and admits shortcomings in the response from the paper's publisher, News International.

The advert says ‘the News of the World was in the business of holding others to account. It failed when it came to itself’.

It said: ‘We are sorry for the serious wrongdoing that occurred. We are deeply sorry for the hurt suffered by the individuals affected. We regret not acting faster to sort things out.’

Two of Mr Murdoch’s top executives resigned yesterday over the crisis that has engulfed his media empire.

The News Corp chief finally abandoned his attempts to protect Rebekah Brooks, former editor of the News of the World, and accepted her resignation as chief executive of his British newspaper unit, News International.

As the FBI began probing allegations that Mr Murdoch's US employees may have hacked the phones of victims of the 11 September, 2001 attacks, the 80-year-old media tycoon changed his strategy for dealing with the crisis.

In a further show of contrition, Mr Murdoch met the parents of murdered teenager Milly Dowler, whose phone was allegedly hacked by the News of the World in 2002.

It was that claim that sparked the crisis and led to the closure of the paper.

‘As founder of the company I was appalled to find out what had happened and I apologised,’ he told a scrum of reporters after the meeting yesterday.

Mr Murdoch also faced chants of ‘Shame on you’ from protesters.

The scandal is continuing to spiral, with the news that British actor Jude Law is suing The Sun over phone hacking in 2005 and 2006, when Ms Brooks was editor, in the first such claim against the Murdoch-owned daily.

News International dismissed the claims as a ‘deeply cynical and deliberately mischievous attempt to draw The Sun into the phone-hacking issue’.

Mr Law is already suing the now defunct News of the World. 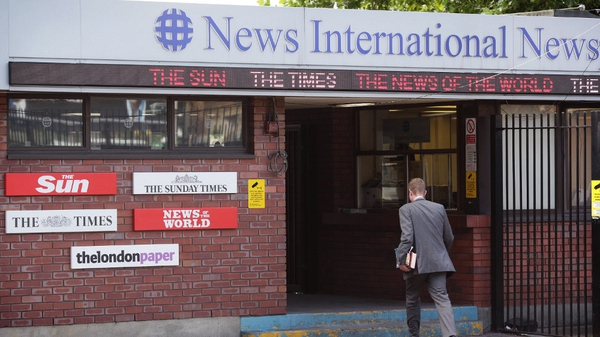