A former senior RUC officer has told the Smithwick Tribunal that his garda counterparts told him that a retired detective garda had been kidnapped and beaten up by the IRA because he owed them money.

During cross-examination by counsel for former Detective Sergeant Owen Corrigan, retired PSNI Detective Chief Inspector Alan Mains said he was told in 1996 by gardaí that Mr Corrigan was kidnapped.

The witness said he was based in Newry at the time and they wanted assistance to try to find Mr Corrigan.

He said he was told by gardaí that their former colleague had been abducted because he owed money to the paramilitaries.

Yesterday, Mr Mains told the tribunal that he was working for RUC Chief Supt Harry Breen on 20 March, 1989.

Before he left for a meeting with his garda counterpart in Dundalk, Mr Mains said the Chief Superintendent told him he was worried that there were gardaí on the payroll of local republican, Thomas 'Slab' Murphy, and he specifically mentioned Mr Corrigan saying he did not trust him.

As he left that meeting in Dundalk, Chief Supt Breen and his colleague Supt Bob Buchanan were murdered by the IRA in an ambush.

The Smithwick Tribunal is investigating claims that a garda mole in Dundalk colluded with the IRA in the murder of the two RUC officers.

Counsel for Mr Corrigan, Jim O'Callaghan, told the tribunal today that his client would be giving evidence to the tribunal at a later stage.

He said in 1982, then Garda Assistant Commissioner Ainsworth said that Mr Corrigan's supply of intelligence was one of the best in the State.

Mr O'Callaghan said that his client had spent 31 years fighting on the frontline against terrorism.

After the Anglo Irish Agreement, counsel said that the IRA had threatened the lives of Mr Corrigan, his wife and children.

His client had handed over a well-known republican, Dominic McGlinchey, at the border to the RUC after which posters were put up showing Mr Corrigan and saying he was 'wanted for treason'.

He and his wife also had pints of beer thrown over them and his wife had a chair thrown at her as a result of her husband's activities combating the IRA.

Mr O'Callaghan claimed that his client had been abducted and viciously beaten by members of the IRA because they believed he was still supplying information to them despite the fact he had retired.

Mr Mains said that his views about the abduction were based on the information he had received from garda colleagues.

Given that and what Chief Supt Breen had said about Mr Corrigan he would 'have a slight doubt in my mind' about him.

Under cross-examination he denied that he was being careless when he phoned Dundalk Garda Station on the morning of 20 March 1989 and left a message that Chief Supt Breen wanted to visit that afternoon to meet Garda Chief Supt Nolan.

He also said he did not mention Mr Corrigan's name in statements to the RUC after the murders because he was advised not to by a senior detective. That detective died last year. He denied the claim that Chief Supt Breen never mentioned that garda to him at all.

Allegations that Mr Corrigan had been an IRA mole and colluded with the murder of the two officers were a 'monstrous lie', according to Mr O'Callaghan.

Mr Mains also told the Tribunal that the IRA in south Armagh did not take risks and set up operations at short notice.

He said that it was his belief that the IRA would not have had enough time between following the two RUC men to Dundalk and them leaving about an hour later to set up the ambush in which the two men were killed. 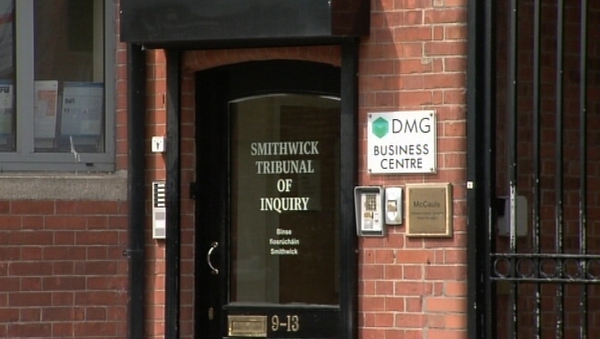