Feilim Mac an Iomaire, who is also known as 'Jobless Paddy', is no longer out of work.

The Galway man has landed a position with Paddy Power bookmakers after his high-profile billboard and social media campaign to help him find a job.

The 26-year-old from Inverin spent all his savings to rent a billboard on Dublin's Merrion Road late in May to highlight his plight.

The ad depicted him standing on a seashore with a suitcase in hand, looking at an horizon featuring well-known global landmarks like the Sydney Opera House and Statue of Liberty.

It carried the caption 'Save me from Emigration' and was followed by his contact information.

Following the campaign and the publicity, he received more than 20 job interviews and received five job offers.

He has now signed a six-month initial contract for a job as a communications executive with bookmaker Paddy Power.

Mr Mac An Iomaire attracted media interest from home and abroad, with his story carried by media organisations in the US, Australia and Nicaragua.

The marketing graduate, who has been out of work since returning last August from a year in Australia, says he could not be happier.

He begins his new job on Monday week. 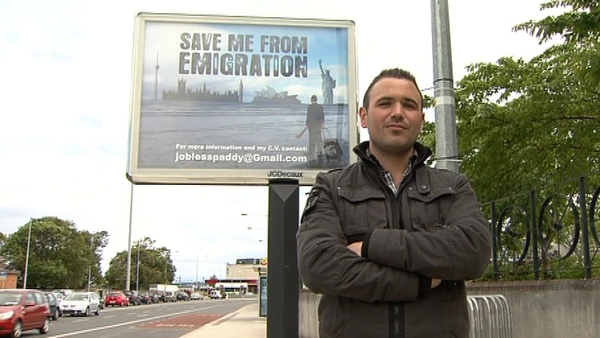