Judge Ralph Alt told the court in Munich he was convinced that 91-year-old Ukrainian-born Demjanjuk was a guard at the Sobibor death camp 'and that as guard he took part in murder of at least 28,000 people'.

Demjanjuk, deported in 2009 from the US, where he had lived for several decades after World War Two, listened to the sentence in his wheelchair and was then moved to a stretcher in the courtroom.

As the judge read out his decision, an interpreter translated into Ukrainian for Demjanjuk, who kept on his dark glasses and did not move.

Prosecutors had called for a six-year sentence and the defence had called for him to be acquitted. Demjanjuk's lawyer said before the verdict was announced that he planned to appeal.

Demjanjuk has kept silent throughout the 18 months of proceedings, sitting in a wheelchair or lying on a stretcher. His health was often a cause for concern during the trial, leading to frequent delays.

The former Red Army soldier was captured by German troops in 1942 and sent to a prisoner-of-war camp before signing up to work as a death camp guard.

The prosecution has argued that if he worked as a camp guard, by definition, he is guilty of helping to kill all the Jews sent there at the time.

The high-profile trial, seen as one of the last to involve an alleged Nazi war criminal, has led to much debate on the subject of delayed justice.

The fact that the accused was a Ukrainian-born prisoner-of-war who now faces justice at the hands of the nation behind the Holocaust has also raised questions.

He is the first foreigner to be judged in Germany for Nazi war crimes. His lawyer, Ulrich Busch, has described him as 'a victim of Germany's justice system'.

The accused, who says he remained a prisoner-of-war until the end of hostilities in 1945, later emigrated to the US where he married, had children and worked as an car mechanic.

He is now stateless, having been stripped of his US citizenship for lying about his past in his immigration application before being deported to Germany, where he has been in jail for the past two years.

Demjanjuk previously served nearly eight years in an Israeli prison, five of them on death row, after being found guilty in the 1980s of being the particularly sadistic 'Ivan the Terrible' guard at Treblinka camp.

The Israeli supreme court later overturned the verdict and ordered his release on the grounds that he had likely been wrongly identified. 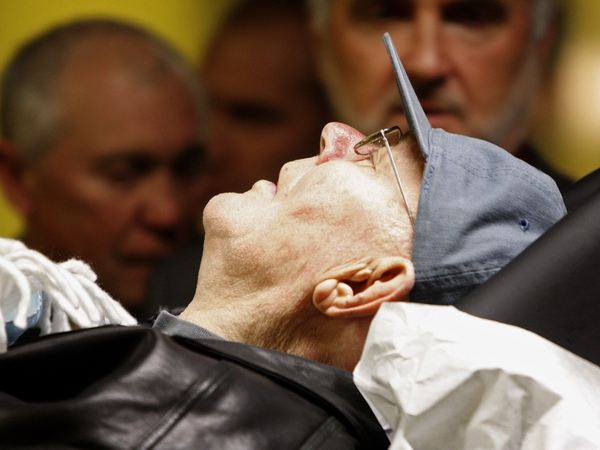