More than one million people have attended a special mass in St Peter's Square in Rome to mark the formal beatification of Pope John Paul II.

'From now on Pope John Paul shall be called 'blessed', Pope Benedict XVI proclaimed in Latin.

To the cheers of the huge crowd, a tapestry showing a smiling John Paul was unveiled seconds after Benedict read the proclamation. A vial of his blood was presented for veneration.

The move is just one step short of full sainthood for the Polish Pontiff who died on 2 April 2005.

Supporters of a candidate for sainthood normally have to wait five years before any evidence is even considered.

However, the pressure for John Paul II to be canonised began almost immediately after his funeral.

The evidence is centred around a French nun who was apparently cured of Parkinson's disease having prayed to the Pope soon after his death.

Doctors have confirmed her recovery and are unable to offer an explanation.

In his homily, Pope Benedict said that John Paul had 'the strength of a titan' and gave millions of people 'the strength to believe'.

Some 50 heads of government attended the mass, including Robert Mugabe of Zimbabwe. The Irish Government was represented by Chief Whip Paul Kehoe.

Some say the beatification is premature, not least because numerous clerical abuse scandals first came to light under his papacy.

However, many more Catholics believe that his struggle against suffering and his contribution to ending the Cold War make him an automatic candidate for sainthood.

Pope John Paul's coffin was exhumed on Friday from the crypts below St Peter's Basilica and will be placed in front of the main altar.

It will remain there and the basilica will remain open until all visitors who want to view it have done so.

It will then be moved to a new crypt under an altar in a side chapel near Michelangelo's statue of the Pieta. The marble slab that covered his first burial place will be sent to Poland. 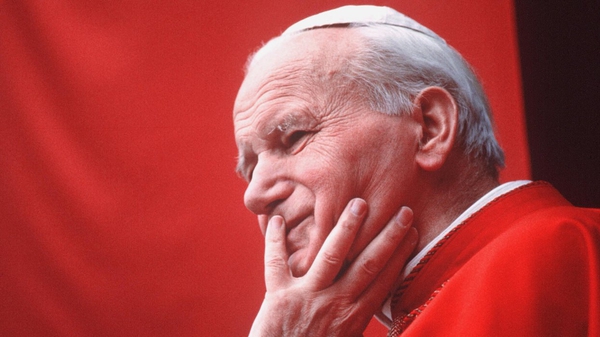