Northern Ireland's First Minister Peter Robinson has said a statement issued to the Belfast Telegraph newspaper from a newly-formed dissident republican group summed up ‘the moral and political emptiness’ of those who killed PSNI Constable Ronan Kerr.

The group is reported to have admitted murdering the PSNI officer in Omagh, Co Tyrone, three weeks ago.

A report in this morning's newspaper said the group, made up of former members of the Provisional IRA, had vowed to carry out more attacks.

They claimed the peace process had failed and that they have taken over the mantle of the IRA.

Up to this point, no dissident Republican group had admitted murdering Constable Kerr.

Last night, detectives charged a 33-year-old man with a number of terrorism offences.

The man, who is from Omagh, has been charged with possession of explosives and firearms with intent to endanger life and with having articles likely to be of use to terrorism.

He will appear in court in Dungannon on Saturday, 23 April.

Responding to the story in today's Belfast Telegraph, Sinn Féin President Gerry Adams called on the dissident group ‘to go away’.

He said the IRA was now a matter of history and that this new organisation had no part to play ‘whatsoever’ in the ‘effort to bring about the Republic’.

Meanwhile, three men have been arrested in connection with a joint An Garda Síochána/PSNI investigation into dissident republican activites in the South Armagh area.

The three are being detained at Antrim Serious Crime Suite.

The investigation is continuing. 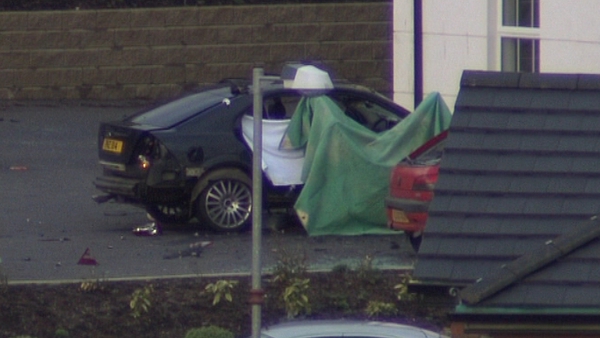