Fierce fighting went on during the day, with heavy machine gun fire resounding through the streets and the whole area overshadowed by a big plume of black smoke.

Amid streets carpeted with debris, rebels and loyalists are fighting a ferocious battle, often at close quarters. Streets are barricaded with orange dump trucks, parts of cars and even bedframes and tree trunks.

Libya's third largest city, the only rebel stronghold in the west of the country, has been under a punishing siege by Gaddafi's forces for seven weeks. Hundreds have died.

NATO said the target was a military command bunker and it had no indication of civilian casualties.

Canadian Lieutenant-General Charles Bouchard, commander of NATO's Libya operations, said civilians should keep away from Gaddafi's forces to avoid being hurt by NATO air attacks. That would allow NATO to strike with greater success, he said.

Rebel fighters voiced frustration with an international military operation they see as too cautious.

‘NATO has been inefficient in Misrata. NATO has completely failed to change things on the ground,’ rebel spokesman Abdelsalam said.

France said it would send up to 10 military advisers to Libya. Britain plans to dispatch up to a dozen officers to help rebels improve organisation and communications, and Italy is considering sending a small military training team.

Tripoli denounced such moves and some commentators warned of ‘mission creep’, after assurances by Western leaders that they would not put ‘boots on the ground’ in Libya.

‘We are not happy about the latest events in Libya, which are pulling the international community into a conflict on the ground. This may have unpredictable consequences,’ Foreign Minister Sergei Lavrov said.

Meanwhile, two press photographers were killed in the town after a group of journalists came under fire in the besieged town of Misrata.

Chris Hondros, who was working for Getty Images, was critically wounded in the hail of gunfire between rebels and forces loyal to Colonel Gaddafi, and died later.

Another photographer, Tim Hetherington, died shortly after the attack. Both men had received several awards for their work.

Mr Hetherington and Mr Hondros were the second and third journalists killed in Libya in its two-month-old conflict.

Ban calls for an end to the fighting

UN Secretary-General Ban Ki-moon has urged the Libyan authorities to 'stop fighting and stop killing people' and said the world body's priority was to secure a ceasefire.

'At this time our priority is to bring about a verifiable and effective ceasefire, and then we can expand our humanitarian assistance, and we are going to engage in political dialogue,' Mr Ban said.

'I urge the Libyan authorities to stop fighting and stop killing people.'

Secretary of State Hillary Clinton has said that the US would not be sending military advisers to aid Libya's rebels despite decisions by France, Britain and Italy to do so.

‘There is a desire to help them be more organized and we support that. We're not participating in it, but we support it,’ she said in a conversation moderated by Charlie Rose at the State Department and aired on PBS.

The White House had earlier said that US President Barack Obama backed the three countries' decisions to dispatch advisers, saying it would help the opposition battling strongman Gaddafi's forces.

Meanwhile, the Irish Government has announced that it is to assist the emergency evacuation of civilians from Misrata.

Tánaiste Eamon Gilmore said Ireland, through Irish Aid, would fund the International Organisation for Migration to evacuate 1000 civilians on a specially-chartered ship.

The IoM has carried out a number of such emergency missions to Misrata, which has been under fire by President Gadaffi's forces for nearly eight weeks.

The UN last week estimated at least 20 children had been killed during the ongoing hostilities.

'Given the increasing number of casualties in Misrata and the thousands of lives that are in danger we felt a responsibility to act,' Mr Gilmore said.

'Colonel Gaddafi's forces have agreed to allow ships into the port to evacuate civilians and we have requested that the IoM undertake an emergency operation on our behalf.'

Minister of State for Overseas Development and Trade Jan O'Sullivan said Irish Aid would contribute the €300,000 cost of the evacuation mission, as well as €200,000 to support the evacuees once they reach the port of Benghazi. 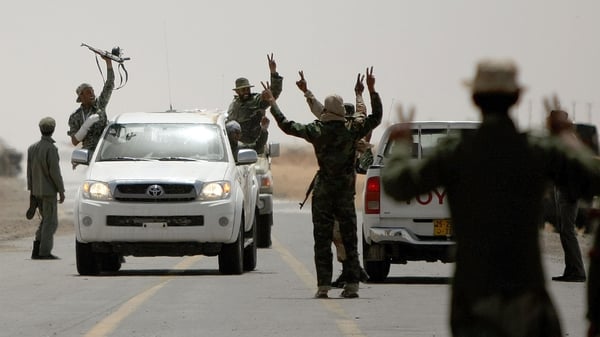