Mr Gbagbo, who was captured on Monday after refusing to cede power after last year's elections, is to remain in detention, according to the new Ivorian government.

'Pending the opening of a judicial inquiry, Mr Laurent Gbagbo and some of his companions have been placed under house arrest,' Justice Minister Jeannot Ahoussou-Kouadio said in a statement.

The government did not say where Mr Gbagbo was being held, nor who the 'companions' were. He was arrested with his wife Simone, son Michel and several former officials of his ousted regime.

The Ouattara government has said it is determined Mr Gbagbo will face justice over the months of fighting that erupted after he refused to admit defeat in Ivory Coast's presidential election last November.

His decade-long rule was finally ended on Monday when troops loyal to Mr Ouattara stormed a bunker in his Abidjan residence.

Mr Ouattara's most pressing task is to quell unrest in Gbagbo strongholds, particularly in the main city Abidjan.

Amid the euphoria yesterday among his supporters, residents in some parts of the city reported fresh clashes involving heavy weapons fire around the Plateau district which is home to the presidential palace.

In Cocody, the neighbourhood where Mr Gbagbo was arrested, a resident said 'there was sporadic small arms fire in the morning, after which we heard rocket and heavy machine-gun fire for several minutes.'

Tensions were exacerbated further by news that a former interior minister who was arrested along with Mr Gbagbo, Desire Tagro, died yesterday in circumstances that remained unclear, sources said.

A Gbagbo supporter alleged Mr Tagro was shot while in custody at the hotel where the ousted president was taken after his capture, but one of the sources, a diplomat, said he might have tried to kill himself.

Fighting in Abidjan has left streets littered with bodies and parts of the city in the grip of looters.

But a semblance of normal life appeared to return to large parts of the city, with traffic back on the streets and some shops reopening.

Mr Ouattara said he would ask the International Criminal Court to probe massacres in the west of the country implicating forces loyal to him and his predecessor.

'I will speak shortly with the ICC's chief prosecutor (Luis Moreno-Ocampo) so the court can begin investigations,' Mr Ouattara told journalists. 'These massacres are unacceptable... I am revolted.'

Hundreds were killed in western Ivory Coast after forces loyal to Mr Ouattara swept through the country to Abidjan from late March.

Massacres were centred on the two of Duekoue and troops on both sides of the conflict were accused of involvement.

The White House said in a statement that US President Barack Obama had called Mr Ouattara 'to congratulate him on assuming his duties as the democratically elected president of Cote d'Ivoire.

UN Secretary General Ban Ki-moon welcomed Mr Ouattara's promise to set up a truth and reconciliation commission to look into accusations of massacres and other crimes made against both sides in the conflict.

The UN, which has more than 9,000 troops and police in Ivory Coast, will keep up its mission helping to restore law and order.

The UN has said that at least 800 people have been confirmed killed in the fighting.

Regional bloc ECOWAS said in a letter to Mr Ouattara that Mr Gbagbo should be treated fairly 'despite his violent and stubborn opposition to the choice made by the Ivorian people.'

The presidential crisis has crippled the formerly wealthy nation's economy, and France and the European Union have said they will give a total of €580m in emergency aid. 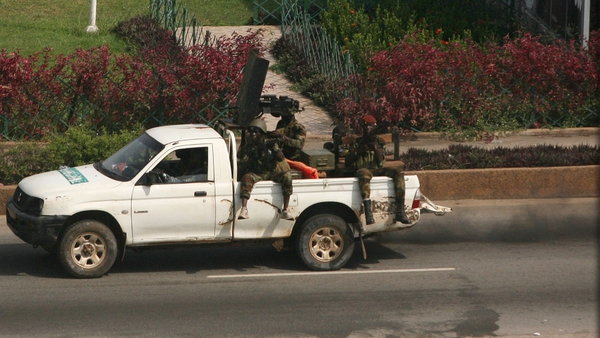