Forces loyal to Ivory Coast incumbent leader Laurent Gbagbo have stepped up a counter-attack on presidential claimant Alassane Ouattara by firing on his hotel headquarters in Abidjan.

But residents in the besieged Ivorian commercial capital came out in numbers not seen in the past 10 days due to heavy fighting, taking advantage of a lull in the bloodshed to replenish their food and other supplies.

Rebel forces seeking to install Ouattara, who won an election last November according to results certified by the United Nations, swept from the north to coastal Abidjan almost unopposed more than a week ago.

But despite a fierce rebel onslaught, Gbagbo's soldiers have held onto swathes of the city, and are now growing bolder.

The US State Department condemned the attack on Ouattara's hotel, saying in a statement that Gbagbo's perceived attempts at negotiation last week were nothing more than a ruse to regroup and rearm.

But even if Gbagbo leaves, Ouattara's ability to unify the West African country may be undermined by reports of atrocities against civilians since his forces, a collection of former rebels from the north, charged into Abidjan. Ouattara's camp has denied involvement.

A UN spokesman in Abidjan said the attack on the Golf Hotel, which Ouattara has made his base since the election, involved heavy weapons that appeared to have been fired from Gbagbo's heavily defended residence.

‘This was not a fight, but a direct attack by Gbagbo's forces, who fired RPGs (rocket-propelled grenades) and mortar rounds, from positions near Gbagbo's residence, at the Golf Hotel,’ A UN spokesman said.

He said one UN peacekeeper had been hurt, and that UN forces had responded by firing on those positions. 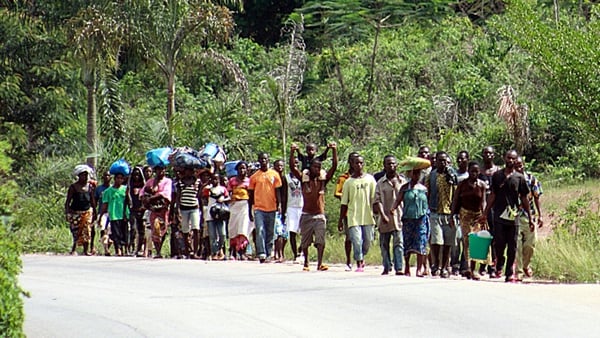