A censure motion against Independent TD Michael Lowry is to be adopted without debate in the Dáil tomorrow morning.

The parties have agreed on the terms of the motion calling on Mr Lowry to resign voluntarily in light of the Moriarty Report.

Deputy Lowry himself said the Moriarty Tribunal would, in time, be exposed as a scandal of ‘truly epic proportions’.

Michael Lowry cut a lone figure in the Dáil over the course of the two-day debate on the Moriarty Report.

He will be a lone figure again when the house unanimously adopts an all-party motion urging him to voluntarily resign his seat, in the light of the unacceptable actions outlined in the report.

The motion was first suggested by Sinn Féin and Fianna Fáil, and accepted by the Government after consideration of its implications.

Mr Lowry said he would not be resigning his seat, and vowed to continue his fight against the Moriarty Tribunal, saying he had options ranging from the High Court to the European Court of Human Rights.

‘I will not walk away from the overwhelming mandate that was given to me by the consitituents of North Tipperary/South Offaly,’ Mr Lowry said.

'I have performed my role as elected representative of the people of North Tipperary to the very best of my ability. I will continue to do so until they decide otherwise.'

The passing of a censure motion will have no practical implications for him, but other TDs hope it will send a clear signal to the public about their view of the findings against Deputy Lowry.

Mr Kenny said he had welcomed the report, but was constrained because of pending legal cases.

He said that he had passed its conclusions on to the competent authorities, but did not stand in judgment on anyone, as that was not his position.

Mr Kenny warned that even if a motion was passed, the Dáil had no power to expel Mr Lowry.

Sinn Féin leader Gerry Adams asked if his party’s censure motion, which was put down this morning, would be taken in Government time.

Mr Kenny said he would consider an agreed motion, but again would have to take into account the legal actions that are pending.

Later on the Order of Business, the Taoiseach said he had no objection to any motion being heard on Government time and that the whips would meet to discuss the issue this afternoon.

Fine Gael has published legal advice it received in 1998 regarding a controversial donation of $50,000 from Telenor.

The advice from senior counsel James Nugent was that the donation did not come under the terms of reference of the Moriarty Tribunal and Fine Gael therefore did not report it to the Tribunal.

In the Dáil yesterday, the Taoiseach said Fine Gael had, with hindsight, been wrong not to override this legal advice.

When the payment came into the public domain, the party subsequently furnished details to the Moriarty Tribunal.

The legal opinion notes that then Fine Gael President John Bruton had been reluctant to accept a donation from Denis O'Brien in 1995, because he had just been awarded the second mobile phone licence.

Mr Bruton instructed party fundraiser David Austin that it should be 'left where it is'.

However, Mr Austin subsequently accepted a payment of $50,000 from Telenor.

Mr Nugent's opinion was that the payment did not come under the Tribunal's terms of reference because it was not made directly or indirectly to Mr Lowry, and because Fine Gael could not be considered a 'connected person' within the meaning of ethics legislation. 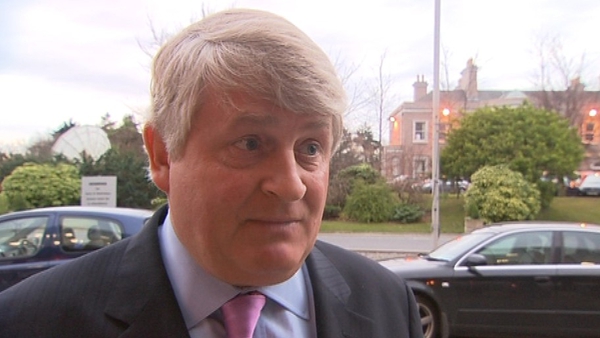