A Derry woman has been found guilty of the double murder of her husband and her former lover's wife nearly 20 years ago.

Hazel Stewart, who is 48 and from Ballystrone Road, Coleraine, had denied killing Trevor Buchanan and Lesley Howell and staging their deaths to look like suicide.

It took a jury of nine men and three women just two hours and 30 minutes to find Hazel Stewart, a former Sunday school teacher, guilty of the murders.

Police constable Trevor Buchanan and Lesley Howell were found dead in a car filled with carbon monoxide fumes in a garage in the seaside town of Castlerock, Co Derry, in May 1991.

Their deaths had been staged to look like suicide.

Stewart had been having an affair with Ms Howell's husband, Colin, and, together they planned, carried out and covered up the killings.

Howell confessed to police 18 years later and is now serving a life sentence with a minimum tariff of 21 years.

Stewart did not give evidence during her trial, but admitted in police interviews that she had been aware of the murder plan, but said she had felt helpless to prevent it.

Her lawyers had argued she had been controlled by Howell and forced to take part in the killings.

The jury disagreed and convicted Stewart of both murders.

Today at Coleraine Crown Court, her son and daughter cried out when the verdict was announced.

Stewart kept her head down but did not speak.

She will learn on 11 March the minimum term she must serve before being considered for release.

The families of murder victims Trevor Buchanan and Lesley Howell have spoken of their grief and sadness upon learning the truth about how their loved ones were killed.

Lesley's daughter, Lauren Bradford, said the family had bitter regrets about the horrible way Lesley had been taken from them.

He said Trevor had been brutally taken away from his family in 1991, and was still deeply missed.

He said Trevor became a victim of a prolonged conspiracy to cover up his murder.

Mr Buchanan said the family's grief and sadness at Trevor's death was accentuated by the shock of knowing how he died.

He said there was no sense of victory today and no cause for celebration.

Detective Superintendent Raymond Murray, who led the investigation, said he understood the anger of the families of the victims about the original police investigation.

He also spoke of the ‘sheer emotional wreckage’ that was left behind after the murders. 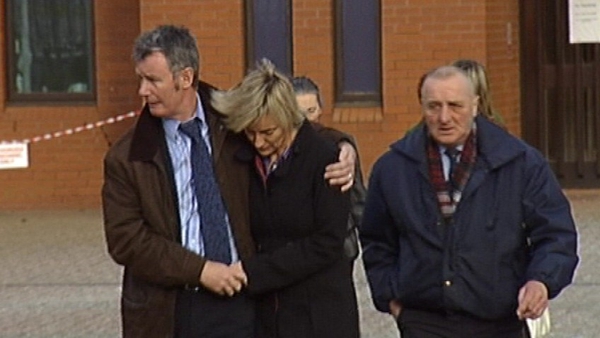