Fine Gael leader Enda Kenny has told RTÉ News that it looks like he will be elected Taoiseach when the 31st Dáil meets on 9 March.

Mr Kenny was elected on the first count in Mayo with 17,472 votes, the highest number of first preference votes received in the General Election so far.

He said this evening that he had not yet ruled out the possibility of a single party Fine Gael Government.

Describing today's events as 'a democratic revolution at the ballot box,' he stressed it was still too early to say if his party would be in government with Labour, with the support of Independents or on its own.

Fine Gael is still in the running for 82 seats, but it would need to get every break going to win that number.

In Dún Laoghaire, Labour called for a complete recount after Ivana Bacik was eliminated when she was just 147 votes behind the next candidate - Richard Boyd Barrett of People Before Profit. That recount will start tomorrow morning.

For the first time, Fianna Fáil has fallen into third place after a collapse of its vote, particularly in Dublin.

Leader Micheál Martin was elected on the first count this evening - the first candidate from his party to do so.

Elsewhere, it was a dismal day for Fianna Fáil, with a number of high profile candidates losing their seats, as Fine Gael, Labour and Sinn Féin make gains. The Greens are facing wipeout.

Green Party leader John Gormley said this was a sad day for the party admitted it had suffered a major defeat.

Labour looks likely to become the second biggest party in the Dáil, with around 35 seats. Labour's Joan Burton was the first TD to be elected, having topped the poll in Dublin West on the first count.

Sinn Féin President Gerry Adams was elected in Louth on the first count. Sinn Féin will be well into double figures.

Smaller parties and Independents are doing well - Shane Ross topped the poll in Dublin South with over 17,000 votes, while Mick Wallace has been elected in Wexford with over 13,000 votes.

Joe Higgins of the Socialist Party has been elected and will be joined by his party colleague Clare Daly, who has gained a seat in Dublin North.

A number of other high-profile Independents may also be elected, including Seamus Healy, who has been elected in Tipperary South, and Finian McGrath, who looks set to take a seat in Dublin North Central. 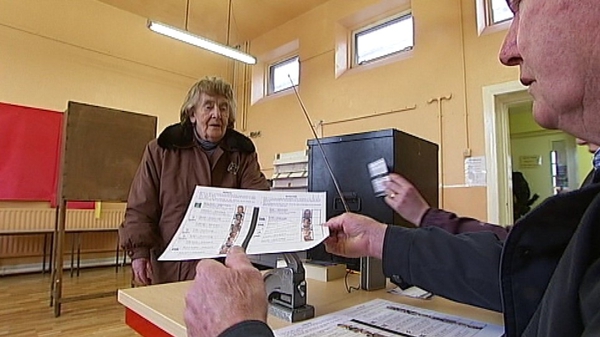