Sunday Tribune employees have been formally told they are being made redundant by the receiver because no firm offers have been made for the business.

The company went in to receivership on 1 February after 29.9% shareholder Independent News and Media said it would no longer fund the business.

Staff received letters today from the receiver McStay Luby telling them they were being made redundant on 28 February and would receive a pay cheque up until this date.

It is understood they are only receiving statutory redundancy.

In the letter, McStay Luby said there had been a small number of inquiries about buying the business but no definite offers had been received.

Jim Luby said he had no option but to make all employees redundant. The Sunday Tribune employed 43 people.

An INM spokesman said: 'This is a very difficult day for the 43 staff of the Tribune who have worked hard to produce a quality and critically acclaimed title in an incredibly crowded market.

'The appointment of a Receiver allowed INM to pay the staff and contributors their salaries for the month of February.

'Jim Luby has told staff that he is continuing his search for an investor and we are hopeful that he will find one.'

Meanwhile, it is understood that the Sunday Tribune has lodged proceedings in the High Court against Associated Newspapers claiming breach of trademark in relation to the Irish Mail on Sunday's dummy wraparound edition.

The papers were lodged last Friday and have not yet been served on Associated Newspapers, the parent company of the Mail. 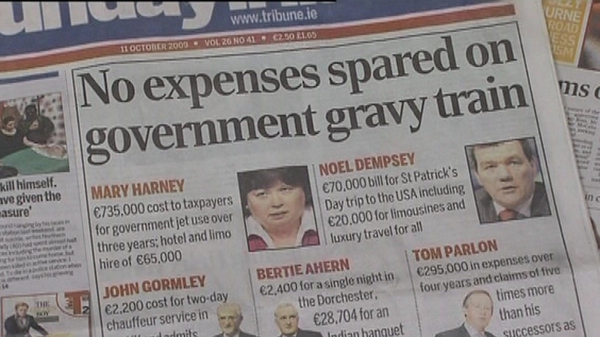