The plight of homeowners moved centre stage in the General Election campaign today as Fine Gael promised aid for those in negative equity.

The party has pledged to give extra tax relief to those who had bought at the height of the property boom.

However, Fianna Fáil dismissed it as an ‘uncosted gimmick’.

There are 300,000 Irish people in negative equity and 40,000 in mortgage arrears, many of them having bought at the peak of the market.

Mr Noonan, Fine Gael's finance spokesperson, said his party’s Mortgage Interest Relief scheme would cost €120m and would be accounted for in its fiscal strategy, which will be published next week.

He said the scheme will be directed at those who purchased between 2004 and 2008.

Mr Noonan said Fine Gael would abolish relief for those buying houses from mid 2011 on, because given the reduction in house prices, people did not need a tax incentive to buy their first home.

Mr Noonan said there is a lot of fat in the banking sector, which could be cut in order to avoid increased charges on customers.

He said NAMA is not working, but it is so complicated dealing with it is like ‘unscrambling an egg’.

Speaking in Tralee, Labour leader Eamon Gilmore said the General Election was a vote on the EU/IMF loan deal.

Labour’s Mr Quinn said some aspects of the current deal are not negotiable, but it needs to be looked at again.

He was speaking at a press conference in Dublin launching a policy document which Labour says will ensure Ireland can avail of job creation through green initiatives.

The party says 30,000 construction workers could be put back to work retrofitting housing stock that is substandard.

Labour’s energy spokesperson Liz McManus said the Government structure needed to grow the industry easily and efficiently does not exist.

At an earlier news conference in Dublin this morning, Mr Martin said there is growing confusion among the public about what needs to be done about the Budget deficit.

He said that only by showing a decisive recovery plan was in place would confidence in Ireland be restored.

Mr Martin added that a restructuring of the EU/IMF deal was likely, but it would only be achieved through consensus and not conflict, he said.

He said parties who said anything different were misleading the people.

Elsewhere, about 400 people are attending Sinn Féin’s Gerry Adams's official launch of his bid to take a Dáil seat in Louth this evening. 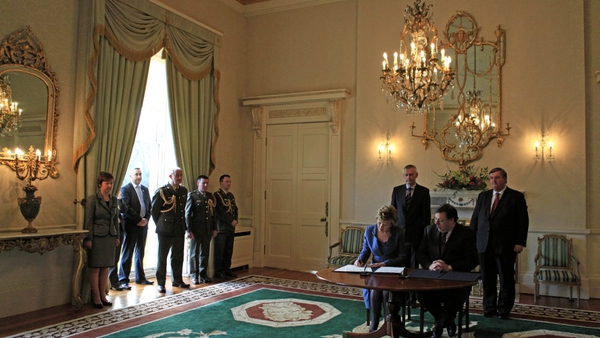