Fianna Fáil, Fine Gael and Labour got their election campaigns under way this morning with official launches in Dublin.

He accused the Opposition of putting forward 'false promises' about debt renegotiation and called for a 'new politics' in the campaign.

Mr Kenny said the plan was integrated and coherent and would provide a solution to the country's problems.

He said the jobs crisis cannot be fixed unless confidence is restored and the deficit addressed.

Labour has also launched its campaign, which it says is focused on jobs, reform and fairness.

Mr Gilmore claimed only Labour could lead the change the country needed with its vision of one Ireland.

He reiterated his belief that for the first time in 90 years the election was a genuinely three-way contest.

He said Sinn Féin would not tie itself to another party as the Green Party and Labour have done in the past.

The first Irish Times opinion poll of the election campaign confirms a strong showing by Fine Gael, with Labour in second place and Fianna Fáil a distant third.

The Ipsos MRBI poll, which was carried out on Monday and yesterday, also shows a significant increase in support for Independents and Others in recent weeks.

1,000 voters across the country were interviewed on Monday and Tuesday by Ipsos MRBI for the first Irish Times poll since mid December.

The Green Party are down 1% to just 1%, while Sinn Féin drop 3% to 12%, showing the fall off from the high after the party's Donegal South West by-election victory.

Satisfaction with the Government fell a further 4% since December to just 4% – 95% say they are dissatisfied, while just 1% said they didn't know.

Meanwhile, a poll in this morning's Irish Independent indicates a drop in support for Fine Gael and a rise for Sinn Féin since the last poll by MillwardBrown Lansdowne two days ago.

Other parties are unchanged with Fianna Fáil at 16%, Labour at 24%, the Green Party on 1%, and Independents and Others at 15%.

A Red C poll for Paddy Power has Fine Gael up two points at 37%.

Voters were also asked by MillwardBrown Lansdowne about satisfaction with the party leaders and Eamon Gilmore still has the top rating of 46%.

Sinn Féin President Gerry Adams is next on 31%, followed by Enda Kenny on 27% and John Gormley on 14%.

Taoiseach Brian Cowen has a satisfaction rating of just 10%.

The 30th Dáil was dissolved yesterday afternoon, with the election confirmed for 25 February. 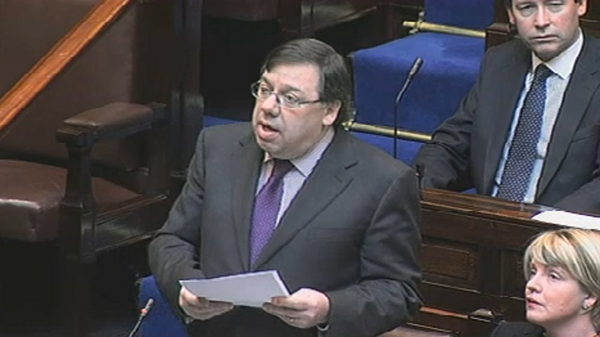