Polling in the General Election is to take place on Friday 25 February.

The date was confirmed after President McAleese dissolved the Dáil at the request of Taoiseach Brian Cowen.

In his farewell speech to the House, Mr Cowen said it had been a privilege to serve the people of Ireland and that every decision he made was done in the interests of the common good.

Mr Cowen told the Dáil that he accepted that some of the decisions he made were not popular but 'they had to be taken'.

He also said the election should be about policies and not personalities.

His family were present in the visitors’ gallery to hear the address - which was given a standing ovation by the House.

In response, Fine Gael leader Enda Kenny said the outgoing government will never be able to dodge the responsibility for driving Ireland into the arms of the IMF.

Outlining his party's campaign promises, Mr Kenny vowed to make Ireland 'the best country in the world in which to do business,' to fix the deficit by cutting waste and to keep taxes down.

He again repeated his intention to have a single chamber political system with a strong committee arm.

Labour Party leader Eamon Gilmore told the Dáil that this election would be the first time that the public will have the opportunity to elect a government that is not led by either Fianna Fáil or Fine Gael.

He also said that Fine Gael and Fianna Fáil were comfortable with each other's policies and had no wish to break up the consensus that had brought us to where we are.

Mr Gilmore said government was not a hospitality tent - roped off for VIPs. Nor was it a big house, shielded from the people by high walls, nor a business for insiders, as it was the business for all.

Green Party leader John Gormley told the House that politics had been denigrated for too long, as have civil servants.

He said he was proud to have served in a government that delivered significant legislation and real political reform.

He praised the creation of more junior ministries. He said the big question now was what more needed to be done.

In his speech, Sinn Féin's Caoimhghín Ó Caoláin told the Dail that the outgoing government made disastrous decisions.

He said he called on all parties to make clear that the EU/IMF deal was not fair or acceptable. He said it was imposed by a discredited government. 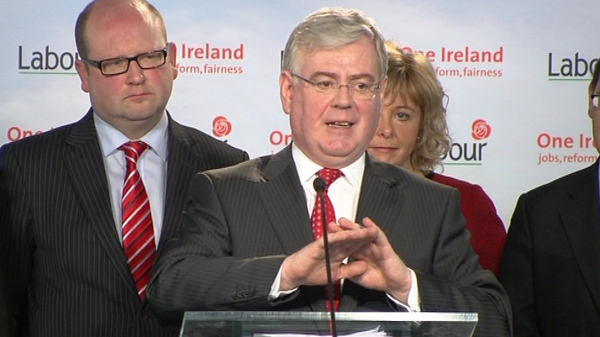