The Green Party has announced that it can no longer continue in Government.

Party leader John Gormley made the announcement during a press conference in Dublin today.

Mr Gormley promised to support the Finance Bill in Opposition.

He said that the party's patience had finally run out and that the people of Ireland had been left 'aghast' at recent political developments.

Mr Gormley said the ongoing ‘saga’ over the question of the Fianna Fáil leadership as well as a breakdown in communication over cabinet promotions were at the heart of the Green Party’s decision.

He said he informed the Taoiseach and other ministers of his party's decision to pull out of Government before it was announced this afternoon.

Mr Gormley said the party believes the Finance Bill can be truncated and there needed to be some co-operation from the Opposition parties so the Bill can be passed, although not in the timeframe they may have wanted.

Minister for Communications, Energy & Natural Resources Eamon Ryan said that Opposition parties said they will be flexible in seeing how the bill can proceed through the Oireachtas.

He said he himself made contact with those parties who have said they will lay aside confidence motions in an effort to progress the issue.

Mr Ryan said all parties must sit down in a civilised manner and do their best to bring the Finance Bill through, which he said would be 'good for the country'.

He said amendments needed to be narrowed to speed up the process.

Mr Gormley said he had resigned as Environment Minister with immediate effect, as have other Green Party members.

He said he did not regret entering Government with Fianna Fáil and was happy the party had made a valued contribution.

The resignations of the two Green Party Ministers have been formally accepted by the President, on the advice of the Taoiseach.

The Taoiseach has also received and accepted the resignations of Ministers of State Ciarán Cuffe and Mary White.

Speaking in Portlaoise earlier, Mr Cowen said he does not accept that the Finance Bill can be progressed through the Dáil in the next seven days and it is now the Government’s priority to proceed with the Bill.

He added that he has no intention of resigning as Taoiseach.

Mr Cowen said Finance Minister Brian Lenihan will meet with the other party's finance spokespeople tomorrow to consider a timeframe for the progress of the Finance Bill through the Dáil.

Deputy Hayes welcomed the certainty that there would now seem to be around the dissolution of the Dáil.

Mr Hayes said there were contacts between Fine Gael and the Green Party yesterday evening and this morning after Fine Gael's Finance Spokesperson Michael Noonan suggested that the Dáil could be dissolved on Friday having passed the Finance Bill.

He said it was the view of both Fine Gael and the Greens that this can be done.

Fine Gael Finance Spokesman Michael Noonan has said there is no reason why the Finance Bill cannot be enacted by Friday.

He said fast tracking the Bill does not suit Brian Lenihan because he is a candidate in the Fianna Fáil leadership and does not want to be tied to the Dáil next week.

Mr Noonan said the party had an obligation to the Green Party and he felt that comments he made on RTE’s Six One News about the passage of the Bill had influenced the Green Party’s decision.

He said that if Fianna Fáil agreed to an election date of Friday 18 February, that it may be acceptable to the party.

He said all night sittings between Tuesday and Friday could ensure the passage of the Bill.

She said recent developments are showing contempt for ordinary people.

The party's Dáil leader Caoimhghín Ó Caoláin said the Finance Bill should not be put before the Dáil and called for its immediate dissolution.

Sinn Féin President Gerry Adams has said the Green Party, Fine Gael and Labour were allowing Fianna Fáil to remain in power in order to facilitate the passing of the Finance Bill.

Speaking to reporters in west Belfast, Mr Adams again called for an immediate dissolution of the Dáil and said a General Election should have been held months ago.

He described today's developments as 'surreal' and 'beyond farcical'.

Labour party leader Eamon Gilmore has said he does not accept Brian Cowen's claim that it is impossible to complete all stages of the Finance Bill before Friday.

He said his offer that the Labour Party would not proceed with its motion of no confidence if the Government gave an unequivocal commitment that the Bill would be enacted and the Dáil dissolved by that day still stands.

He accused Fianna Fáil of trying to create time to elect a new leader and advance its election preparations and said the party is determined to cling to office as long as possible.

Labour's Justice Spokesman Pat Rabbitte has said it was now time Fianna Fáil stopped procrastinating and realised that the life of this Government has come to an end.

Speaking on RTÉ Radio, Mr Rabbitte said his party has no objection to the meeting the Minister for Finance on Tuesday night to discuss the passage of the Finance Bill.

Ruairi Quinn said if the party does not get a commitment on passing the Finance Bill they will move their motion of no confidence in the Government.

He said Mr Lenihan had been less than economical with the truth about the timeframe needed and that the Bill could be enacted in two days if necessary.

Mr Quinn said that Fianna Fáil were putting the country behind their own interest.

Earlier, the Labour Party said that it would hold off on its motion of no confidence in the Government if it commits to bringing forward the Finance Bill and has it enacted by Friday next week.

The party also wants the Government to dissolve the Dáil and call an election on Friday.

Brian Lenihan said that if the General Election was to be accelerated, it would only be by a matter of a week or two at most because 'the Finance Bill timetable has to be observed and the legislation has to be enacted'.

He added that it was logistically impossible to enact the Finance Bill in a week, as proposed by Fine Gael and Labour.

Mr Lenihan acknowledged, however, that there is an appetite for an accelerated timetable for passing the bill. He admitted it could be brought forward, but insisted that the timetable must be realistic.

Minister Lenihan said the Finance Bill was an essential part of delivering international credibility to Ireland. He said the country needs to show it is in a position to conduct its business.

He said they are considering today's developments and that their votes cannot be guaranteed on the Finance Bill.

Mr Lowry urged the Opposition parties to try to reach agreement on amendments in their discussions with the Minister for Finance if they wish to guarantee the enactment of the Bill.

In the event that the Opposition parties decide to vote against the Bill its enactment would be uncertain and would then depend upon the support of Mr Lowry and Mr Healy Rae. 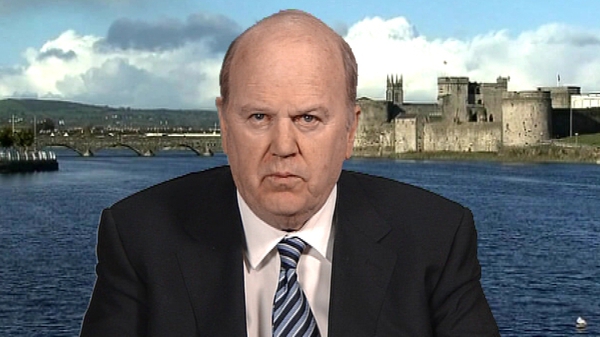