Fine Gael's Finance Spokesperson Michael Noonan says that his party is prepared to support the Finance Bill through all stages of the Dáíl by Friday, on condition that the Government stands down.

Mr Noonan says that if the Bill is the only issue locking the Green Party into Government, then Fine Gael would facilitate them in getting out.

He says that after reading the proposed legislation, it gives a signal that Ireland would remain mostly in charge of its own financial affairs and his party was willing to support it.

Mr Noonan said that Ireland is losing credibility internationally by the day.

Labour TD Róisin Shorthall also said that her party is willing to push through the Finance Bill if it meant an immediate General Election was called.

The party's Spokesperson for Social and Family Affairs says that if the Bill is the only concern keeping the Government in power, then they would help in dealing with it in a short space of time.

Ms Shorthall says that it would be ‘feasible’ to have the Bill pass all stages by the end of the week.

She says the Government is imploding, has no moral authority and called for a General Election to be held as soon as possible.

Sinn Féin's Justice Spokesperson Aengus Ó Snodaigh said that it may be essential to bring an end to, what he called, 'the chaos' of the current Government.

Earlier, Fine Gael leader Enda Kenny called on Taoiseach Brian Cowen to go to Áras an Uachtaráin this evening to dissolve the Dáil.

Speaking to reporters in Templepatrick, Co Antrim, Mr Kenny said it was utter and complete madness for Brian Cowen to resign as leader of Fianna Fáil and remain on as Taoiseach of the country.

He said Fianna Fáil was now a leaderless party in Government with a powerless Taoiseach, and he accused Mr Cowen of directly contradicting the position he had stated less than a week ago.

Mr Kenny said Ireland was now the ‘laughing stock of Europe’, and said the Taoiseach was continuing to put party politics before the good of the country.

He said it would be up to the Green Party and Independents to decide whether they should support the Taoiseach when Fine Gael moves a motion of no confidence in Mr Cowen on Tuesday.

Sinn Féin President Gerry Adams said that ‘The Taoiseach needs to call a General Election now. It's time to let the people have their say.’ 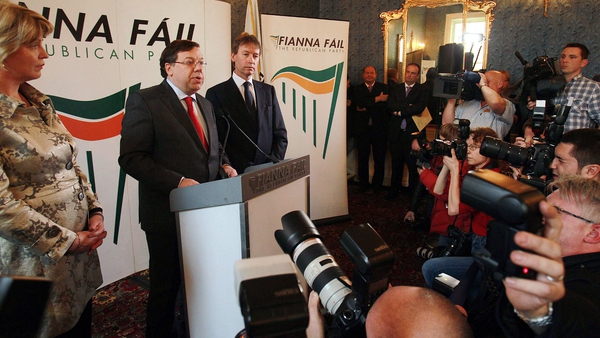 As It Happened - Cowen steps down as FF leader