Brian Cowen has announced that he is resigning as leader of Fianna Fáil.

As it happened / Watch the announcement

Speaking at a press conference in Dublin, he said he had made this decision on his own counsel.

He will remain as Taoiseach.

Asked when he had made his decision, Mr Cowen said it was only when he went home last night and discussed the matter with his family, and made a political assessment of the situation, that he decided to come up this morning and make the announcement.

Brian Cowen says that a united party is, in his view, the most important thing going into the General Election.

Speaking in Irish he said he had done 'the right thing' given the events of the week.

Mr Cowen said he had not been in touch with any of his colleagues and that he had made the decision on his own counsel.

He said he had taken everything into account, and that it was the right thing to do for the party.

He said it was about him as Taoiseach directing his attention, for the good of the country, on the Finance Bill.

Mr Cowen said he had spoken to Green Party leader John Gormley before the press conference as a matter of courtesy.

His decision to step down as party leader does not in any way affect Government business, he added.

The Taoiseach says he believes the Government will win the confidence vote to be tabled on Tuesday by the Labour Party.

He said that he will decide whether to contest the General Election in Laois-Offaly in consultation with his party organisation.

With reference to his attempt to appoint new ministers last week, he said he believed it was his duty to put in place the best possible team he could to fight the election, and to put them on the front bench, to give them a stake in the election and to make them accountable.

It was not a cynical move by him, he said.

Mr Cowen said whoever would succeed him was a matter for the parliamentary party, and that he would fully support them.

He said he took responsibility for the events of the week.

New leader to be elected on Wednesday

Four senior members of Fianna Fáil have put their names forward to contest the leadership of the party.

Earlier, the party Chairman John Browne announced the rules of the leadership contest.

Nominations must be received by the Chairman by 1pm on Monday.

Any Fianna Fáil TD can be nominated to contest for the position.

Nominees should be proposed and seconded by a Fianna Fáil member of Dáil Éireann.

The new leader will be elected at a special Fianna Fáil parliamentary party meeting at 2pm on Wednesday.

The election will be by secret ballot, and will be by proportional representation.

14 Fianna Fáil TDs have declared their support for Mr Martin. 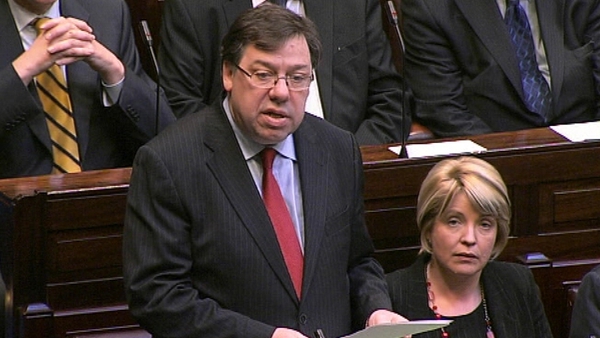