Taoiseach Brian Cowen has said the General Election will take place on 11 March.

Mr Cowen made the announcement (read) during a day of political turmoil at Leinster House in which he tried, but failed, to appoint six new Fianna Fáil ministers.

The move was blocked by the Green Party, which said this afternoon that it had been forceful in opposing any new Cabinet appointments.

Party leader John Gormley said it would have been a ‘final insult’.

Mr Cowen has instead reassigned the vacant portfolios to current ministers.

After Mary Harney's resignation last night, Tánaiste and Minister for Education & Skills Mary Coughlan will also take over as Minister for Health & Children.

Minister for Social Protection Eamon Ó Cuív will take over the Defence portfolio from Tony Killeen.

In addition to Agriculture, Fisheries & Food, Brendan Smith will now be responsible for Justice & Law Reform, instead of Dermot Ahern.

There were sharp exchanges and general disorder as the Dáil met this morning, as Opposition parties called on the absent Taoiseach to go in and make a statement on the resignations of at least five Cabinet ministers.

Fine Gael leader Enda Kenny criticised Brian Cowen for not being in the Dáil to discuss the resignations, which he said had been plotted and planned for the last couple of weeks.

He challenged the Green Party to stand up to their coalition partners.

Labour Party leader Eamon Gilmore said what had happened was disrespectful to the people. He said it had always been the case that when ministers resigned, the Taoiseach would make a statement to the Dáil.

The House adjourned by mid-morning to await the Taoiseach’s arrival and at lunchtime he confirmed that four Fianna Fáil ministers had resigned.

He said he would not be bringing new faces to Cabinet but would be reassigning their responsibilities.

He then announced he intended that the General Election would take place on 11 March.

Mr Cowen insisted that he had been entitled to try to bring in new talent, but he admitted there was not support for the move.

Minister of State Conor Lenihan this afternoon called on Mr Cowen to resign, while Fine Gael and Labour accused the Taoiseach of mishandling events.

Labour leader Eamon Gilmore also said his party would leave its motion of no confidence in the Government on the agenda for now.

Sinn Féin's Caoimhghín Ó Caoláin said it was a pity the Green Party had not shown backbone by standing up to Fianna Fáil before now.

However, all parties welcomed the fact that a date had been given for the General Election, with the Labour Party saying it was sorry it would not happen sooner. 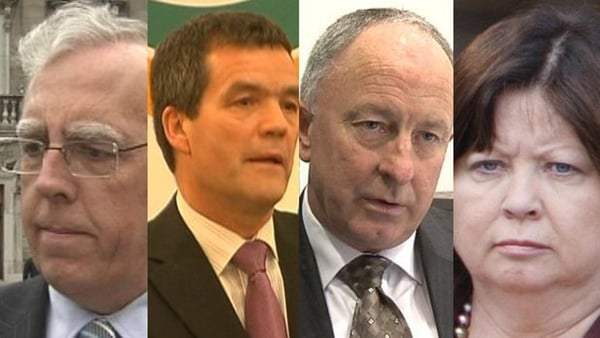