In the report, Oxfam is sharply critical of a recovery commission led by former US President Bill Clinton.

The disaster on 12 January last year killed an estimated 250,000 people, left more than 1m homeless and devastated much of the capital, Port-au-Prince.

The aid agency acknowledged that disaster recovery can be slow, even in developed countries, but said efforts in Haiti had been paralysed by a lack of leadership from the Haitian government and the international community.

The report also cited United Nations figures showing that less than half the $2bn pledged for Haiti's reconstruction at an international donor conference in New York in March had actually been disbursed.

Meanwhile, a separate report by human rights group, Amnesty International, reveals that women and girls in Haitian relief camps continue to face the trauma and threat of sexual attack.

Amnesty has warned that armed gangs are roaming compounds and preying on vulnerable women.

The report's author, Gerardo Ducos, said the authorities had to do more to deal with the situation.

‘There is no security for women and girls in the camps,’ Mr Ducos said.

‘Armed gangs attack at will, safe in the knowledge that there is little prospect that they will be brought to justice.’

Most rape victims are assaulted by armed men and gangs of youths who roam the poorly lit, overcrowded camps after dark.

Few of the rapes are reported to the police or health authorities, either because the victims fear reprisals or because they do not know who to turn to for help.

Women who did report a rape to the authorities said they were either told that nothing could be done for them, or were asked to pay the police - with money they do not have - for inquiries.

Meanwhile, a UN spokeswoman has criticised as 'shameful' the response to an appeal to counter the deadly cholera epidemic in Haiti after the world body received only a quarter of the funding it needs.

'Out of the $174m (€131m), the UN has only received $44m or 25% of the funds we asked for, although (the situation) is of the utmost urgency," the spokeswoman for the UN Organisation for the Coordination of Humanitarian Affairs (OCHA), Elisabeth Byrs, told AFP.

'It's not moving. It's shameful that we should have so little money for an illness that currently kills in a flash because people don't have rehydration salts.'

Cholera can swiftly dehydrate patients without treatment for potentially deadly cases of diarrhoea.

The disease has left 3,333 people dead and infected 150,000 since it suddenly appeared in the quake and storm hit Caribbean nation last October, according to figures given by Haiti's health ministry last week.

The Pan American Health Organisation warned in November that up to 400,000 people could fall ill with cholera in a year.

RTÉ's Jim Fahy visits Haiti a year after the earthquake. Watch 'Haiti - Hell to Hope' on RTÉ One, Sunday, at 10.30pm. 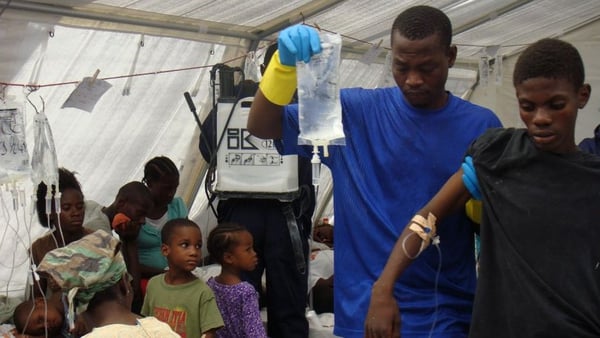