The European Union and the Government have announced they have agreed that Ireland will be provided with €85 billion in financial support.

Chair of the Eurogroup Jean Claude Junker said that the €85bn being made available to Ireland includes €10bn for recapitalisation of the banks, €25bn for banking contingencies and €50bn for budgetary financing needs.

The Government said in a statement that the State’s contribution to the facility will be €17.5 billion, which will come from the National Pension Reserve Fund and other domestic cash resources.

The statement said that if the funds are drawn down in total today, the combined annual average interest rate would be of the order of 5.8% per annum.

The rate will vary according to the timing of the drawdown and market conditions.

The Minister for Finance has said the interest rate that Ireland will be paying would be the same as that for Greece if they had gone for a seven and a half year loan period.

Brian Lenihan said Greece was currently on a lower rate of interest because they had gone for a three year loan period and are now facing a funding crisis at the end of that period.

He said the longer period ensures we will experience no funding crisis at the end of our term.

The Minister also said that subordinated bondholders would be dealt with aggressively but said the European partners had ruled out making senior bondholders pay as it would have a spill over effect on the euro.

The Taoiseach said the loans would allow Ireland to fund budgets over the coming years.

He said the programme represents a very large increase in our national debt over the course of this unprecedented economic crisis and this must be addressed over time.

Nevertheless, he said, we believe it is sustainable if we fully implement the national recovery plan.

The duration of the programme is for three years while the average length of the loans is up to seven and a half years.

Mr Cowen said this was money the country would otherwise have got from the markets, but it would have been at higher prices.

He repeated that the four-year plan stood but the extended 2015 target for deficit reduction simply allowed for some scope if growth did not reach targets.

The Taoiseach said that the remaining €17.5bn in the programme will be funded from Ireland's own resources and that this approach was reasonable in the context of such large loans from other countries and as a means of reducing the total amount of debt involved.

He said that crucially for Irish jobs the agreed programme does not involve any change to our corporation tax rate of 12.5%.

In addition, he said, Ireland has obtained more room for manoeuvre by agreeing with the European Commission that the timeframe for reducing the deficit below 3% of GDP can be extended to 2015 if the four-year adjustment of €15bn proves insufficient.

This programme, he said, is absolutely essential for the country.

The Taoiseach said the Government estimates that the debt ratio will stabilise in 2013 and that interest payments would represent over 20% of tax revenue in 2014.

Of the total package €35bn is to be used to support the banking system. Of that €10bn will be used immediately to inject fresh capital as a buffer against expected loan losses.

The remaining €25bn will be made available as a contingency fund, effectively a massive overdraft facility, to be drawn down by the banks as and when required.

IMF mission chief Ajai Chopra said the financial aid negotiations had included talks on a ‘deeply discounted’ purchase of certain debts owed to bondholders by AIB and Bank Of Ireland.

He said this would be similar to the ongoing exercise at Anglo Irish Bank where the holders of subordinated debt have been offered 20 cent for every euro owed to them thus writing off 80% of that class of bond debt.

Mr Chopra said that was the only provision in the programme on the issue of bondholders sharing some of the cost of the rescue deal.

He also described the National Pension Reserve Fund element of the deal as ‘unique’ in this type of negotiation.

He said the fact that Ireland had such a ‘cash buffer’ was a sign of ‘underlying strength’ in the Irish economy.

ECB representative Klaus Masuch also confirmed that the 5.8% average annual interest rate for the funds to be supplied to Ireland ‘does not include the IMF contribution’.

President of the European Central Bank Jean-Claude Trichet welcomed the package for Ireland saying it contained the necessary elements for the sustainable stabilisation of the Irish economy.

He said the senior debt of bondholders will not be involved in the Irish programme.

Mr Rehn also said he is aware that the Irish authorities are considering certain discounts for the subordinated debt, but there will be no haircut on senior debt.

Mr Rehn said it is absolutely essential that every EU member state should complete the financial repair of their banking systems.

He said this is well under way and that bank stress tests, which were conducted this summer on the basis of vigorous common methodology, need to repeated next year.

The Commissioner said that Ireland will undergo a vigorous bank stress test during the first quarter of next year.

IMF chief Dominique Struass-Kahn confirmed that the Fund will contribute €22.5bn to Ireland's bailout, and said it is likely to be approved by the IMF board in December.

‘The strategy for the financial system rests on twin pillars: deleveraging and reorganization; and ample capitalization,’ Mr Strauss-Kahn said in a statement.

‘A fundamental downsizing and reorganization to restore the viability of the system will commence immediately.’

Minister for Finance Brian Lenihan held meetings with his European counterparts in Brussels last night to finalise the negotiations on the deal with the European Union and the International Monetary Fund.

The Government had been in intensive discussions with officials from the EU, the IMF and the European Central Bank for more than a week.

The finance ministers are keen to end market uncertainty and prevent the debt crisis from spreading to other eurozone countries, mainly Spain and Portugal.

Meanwhile, Germany and France have reached a deal on a future permanent mechanism for resolving crises in the eurozone and the main points of the agreement are set to be presented today. 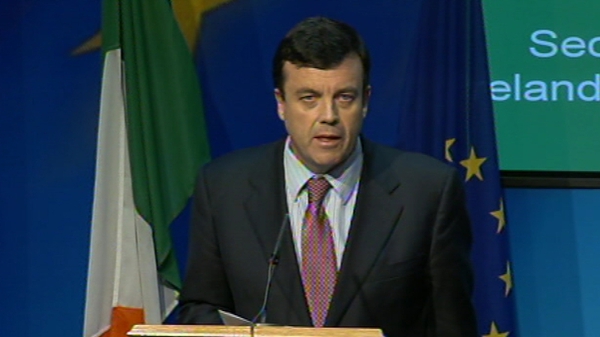