The Government has announced a reduction in the minimum wage and increases in VAT and student fees, under its four-year plan.

Read the full plan and the summary leaflet

The plan outlines how the Government will make €15bn worth of spending cuts and tax-raising measures by 2014, €6bn of which will take place next year.

The minimum wage is to be reduced by €1 an hour to €7.65 an hour, while a review of registered employment agreements will also take place.

The VAT measures are expected to increase yield by €620m in a full year.

One of the main measures is a phased reduction in the tax relief on pensions for those on the higher rate of tax.

The corporation tax rate will remain unchanged at 12.5%.

The lower rate on labour intensive services will be left unchanged as any increase could harm employment.

There will be the phased abolition of legacy capital tax reliefs (in line with Programme for Government) over the four years. There will be a further abolition of ten reliefs in Budget 2011, including trade union subscriptions.

Income tax relief for rent paid on private rented accommodation is to be phased out on the same timeline as mortgage interest reliefs - by 2017.

Six more tax reliefs are to be curtailed, including the artists' exemption.

Spending on social welfare is to be reduced by 14% over the four-year period, with cuts of around 5% next year, though the details are being left until Budget day.

There will also be deductions from current public service pensioners, ranging from 6% to 12%, though those below €12,000 a year will be exempt.

There are also plans to introduce water metering by 2014, while a site valuation tax to fund local services will also be introduced.

EU Commissioner for Economic and Monetary Affairs Olli Rehn has welcomed the Government's four-year plan as ‘an important contribution to stabilising the public finances’.

He said it would constitute the foundation of the EU/IMF programme currently being negotiated between the Irish Government, the ECB, the European Commission and the IMF, which he hoped would be published by the end of the month.

In an interview with the Finnish broadcaster, YLE, Mr Rehn said the plan ‘strikes the right balance between expenditure cuts and taxation increases which are necessary in the Irish situation.

'Of course we will study the plan in detail. In terms of the broad outlines it is an important contribution to the stabilisation of the public finances and will form the basis of the EU/IMF programme.'

Mr Rehn said he was following very closely the movements in the bond markets, but said the Irish situation was very different from that of Portugal and Spain.

‘In Portugal and Spain the banking sector is strong and resilient. In Portugal there is relatively low growth, but the country is taking bold and courageous steps.'

‘We can see a certain systemic challenge to the euro and we'll do our utmost to stop this contagion effect’.

Mr Rehn added: 'The plan is a sound basis for the negotiations on the fiscal and structural reforms of the policy programme underlying the international financial assistance that Ireland has requested to the European Union and the International Monetary Fund.' 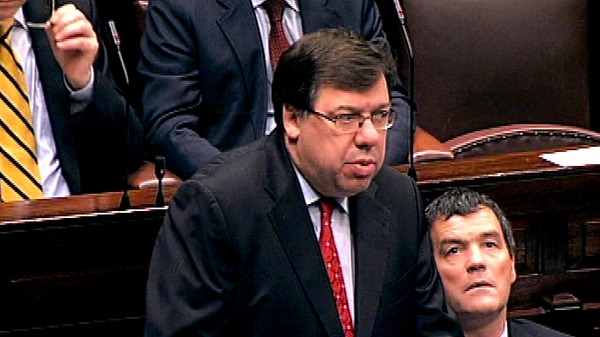