A first case of cholera has been detected in the Dominican Republic, which shares the island of Hispaniola with Haiti.

The death toll in Haiti from a recent outbreak of cholera has climbed past 1,000.

The patient is a 32-year-old Haitian-born man named Wilmont Lowel. His condition was said to be stable.

Mr Lowel is a construction worker who had been at home in Haiti on holiday before returning to the Dominican Republic last Friday.

Dominican authorities have tightened border controls and stepped up health checks in an attempt to stop the disease from spreading from Haiti.

Authorities say they have detained 170 people suspected of trying to get across the border without proper documentation.

'This really is a serious danger,' a Dominican Medical Board official said. 'Cholera could become a pandemic if it spreads on this side of the island. We must avoid a disaster of that scope.'

The outbreak has led to violence in Haiti, between locals and UN peacekeepers, some of whom are feared to have been its source.

'You must be even more watchful of those who exploit the country's misfortunes for their own benefit.' 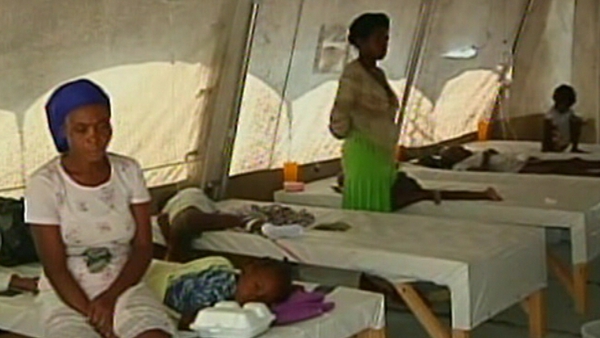