Taoiseach Brian Cowen has said there are big decisions to be taken this year and said he will continue to work as leader of the Government and the Fianna Fáil party.

Mr Cowen was responding to speculation about his position at a media briefing with Minister for Finance Brian Lenihan this evening.

The Taoiseach said the country has a Government with a working and stable majority and it has to continue to persuade the people that the priorities identified are the right ones for the country.

Mr Cowen said he is not a 'Taoiseach on probation' and has the full support of his party as the Government faces into crucial decisions in the coming weeks and months.

He said he would continue to work with his colleagues in an atmosphere of 'mutual respect'.

The Taoiseach said current discussions in Government were not about elections and the best way forward for the country was the continuation of the present Government.

Mr Cowen said 'I'm speaking to the Irish people as Taoiseach and telling them they have strong Government', he said he would be working with the Minister for Finance on behalf of the people to get the country through challenging times.

Government Chief Whip John Curran described the call as a distraction from the real issues and said he saw no demand for such a meeting.

However, Enterprise Minister Batt O'Keeffe admitted the party needed to be reassured.

The Taoiseach has been under pressure since he gave a controversial interview to RTÉ's Morning Ireland last week.

Mr Kennedy said the Taoiseach must outline his communication strategy with the party and the wider public and how he plans to implement Government policy.

Minister Lenihan said he 'absolutely' supports Mr Cowen and he expects him to lead Fianna Fáil into the next election.

Speaking on RTE's Six-One News, Mr Lenihan said members of the party raised concerns about what happened in Galway last week but he said that issue was now closed.

Minister for Justice Dermot Ahern said he did not believe there should be a parliamentary party meeting.

Mr Ahern said he had not heard any calls from backbenchers to have such a meeting, adding that Mr Cowen was determined to continue in office and had his full support.

In another development, Independent TD Michael Lowry said he would not support any Fianna Fáil nominee for Taoiseach other than Mr Cowen.

Mr Lowry said: 'Because of the current public debate, I want to make it clear, in the event of Fianna Fail putting forward an alternative candidate for Taoiseach, I will not vote for that nominee.

'It is unfair and undemocratic of the Fianna Fáil party to expect the Dáil to change Taoiseach three times in the lifespan of one term of Government.

'There should only be a change of Taoiseach after the public have the opportunity to vote in a General Election.'

He maintained that fellow Independent Jackie Healy-Rae felt the same.

That would make a new Taoiseach's margin in the Dáil virtually unworkable if the Independents voted as a bloc against the Government.

Meanwhile, Labour leader Eamon Gilmore has said the Greens and Independents supporting the Government must rule out any attempt to elect a new Taoiseach without a General Election.

Referring to speculation over the weekend, Mr Gilmore said it appeared some Government TDs wanted to ditch Mr Cowen in the hope this would limit the damage facing Fianna Fáil in the next election.

However, he said any attempt to elect a third Taoiseach in the lifetime of this Dáil would be 'unthinkable'.

He also said that putting off the General Election would further delay the process of national recovery.

Elsewhere, a well placed European Union official has told RTÉ News that, given what he described as a 'very, very challenging situation' in Ireland, political stability was important.

Without making any explicit reference to the controversy surrounding Mr Cowen's Morning Ireland interview, the official said: 'Political stability is important when you have to pass budgets, when you require sacrifices from the public.'

Ireland, he added, had the highest deficit in the EU.

He drew a comparison with Spain, where the socialist government is passing unpopular reforms to lower its budget deficit.

'The government there has a comfortable majority, it can pass laws,' he said. 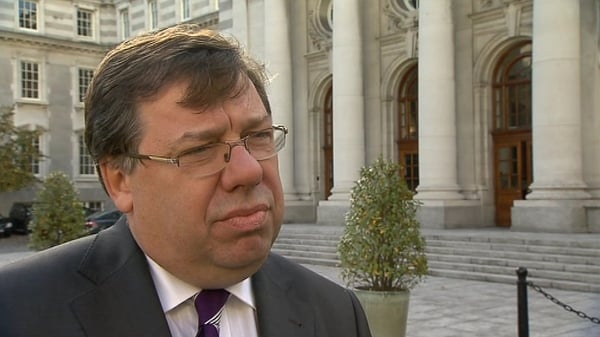