The High Court has heard that a solicitor, who has been suspended from practising, used more than €1m from a deceased client's estate to buy his own house and other properties.

The money from the estate of Dónal Ó Súilleabháin was left to the Share fund of the Catholic Archdiocese of Dublin, which is administered by the Archbishop of Dublin.

The Archbishop was today granted leave to be made a notice party to the proceedings being taken by the Law Society against the firm of Seán Ó Ceallaigh and Company and solicitor Ruairí Ó Ceallaigh.

The court allowed Ruairí's brother, Cormac Ó Ceallaigh, to continue to run the firm their father founded 52 years ago for at least another two weeks.

The Law Society said today it had uncovered no evidence that Cormac knew about what his brother had done.

The High Court heard today that the deficit in the accounts of Seán Ó Ceallaigh and Company amounts to €4.3m.

A total of €1.5m is owed to the banks relating to four properties that were double mortgaged.

Another €2.4m was clients' money, which was used by Ruairí Ó Ceallaigh to buy property and gamble on the stock market.

More than half of this money was left by a client, Dónal Ó Súilleabháin, to the Catholic Church in Dublin.

The court heard that Ruairí Ó Ceallaigh used this money to pay for the house he is now living in and a number of other properties.

Lawyers for the Archbishop asked the court to be given notice about the legal proceedings being taken by the Law Society.

The Archbishop also asked for an undertaking that Ruairí Ó Ceallaigh and his brother Cormac would disclose all documents relating to the Ó Súilleabháin estate within 48 hours.

The court was also told that continuing investigations by the Law Society had shown that Cormac Ó Ceallaigh did not know about his brother's activities.

The court heard that the society is prepared to allow Cormac to keep the Ó Ceallaigh firm open for at least another two weeks while an independent accountant prepares a report.

The accountant, David Rowe, has ten days to prepare a report into the viability of allowing Cormac Ó Ceallaigh to continue to practise on his own and whether there is any possibility that this would allow him to repay the money owed.

A number of other people indicated to Mr Justice John Edwards that they had an interest in what was going on.

Irish Life and Permanent, who received undertakings from Seán Ó Ceallaigh and Company, were made a notice party to the proceedings. AIB indicated that they may apply to be made notice parties.

The court also heard from lawyers representing a woman in her 80s, who is the beneficiary of a will being administered by the firm.

Lawyers for Bernadette Ryan said she was living in penury, and despite her efforts since 2007, has not been told about the status of the administration of the estate.

Two brothers, Justin and Gerald Harmon, who were involved in a dispute over fees, which was resolved in favour of Cormac Ó Ceallaigh, said they wanted to tell the court that Cormac Ó Ceallaigh was of bad character and the Law Society was being disingenuous.

Mr Justice Edwards said they could bring their concerns to the society and they could raise them in court again if they were not happy with the society's actions. 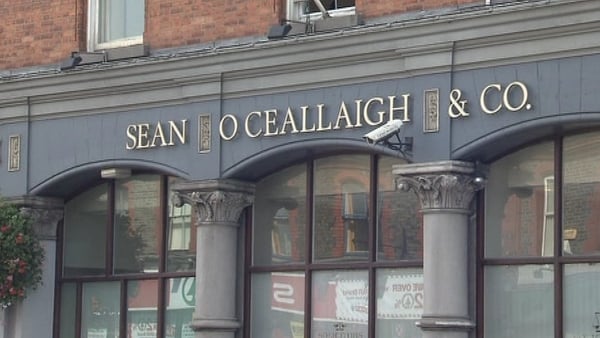