Pakistan's Ambassador to Ireland has said if the world does not send aid quickly enough there will be a major humanitarian disaster and millions of people could die.

Speaking on RTE’s This Week, Her Excellency Mrs Naghmana Hashmi described the flooding as a ‘global disaster’ and said millions of people were in danger of immediate starvation and disease.

Mrs Hashmi said 20 million people were displaced by the flooding, and one in ten was destitute.

Trócaire's regional manager in Pakistan, Paul Healy, said the situation in the south was very desperate.

He said there was not enough food in the country and Trócaire was trying to access food and medicines to bring into Pakistan.

Meanwhile, Pakistan's Prime Minister Yousuf Raza Gilani has called for an urgent meeting of health officials, provincial leaders and aid agencies to coordinate efforts against the spread of disease in flood hit areas of the country.

The move follows public criticism of the government's handling of the disaster to date.

Tens of thousands more people are still being moved to safety as flood waters continue to deluge the southern province of Sindh.

The International Monetary Fund is to hold talks with Pakistani officials in Washington tomorrow to assess how it can help the country.

Pakistan is reportedly ready to ask the IMF to ease the terms of a $10bn loan, which since 2008 has helped to prop up the enfeebled economy.

Yesterday, six flood victims, including three women and two children, were killed and 25 others injured after being electrocuted in the Kashmore district of Sindh.

The US has given the most, followed by Saudi Arabia and Britain. 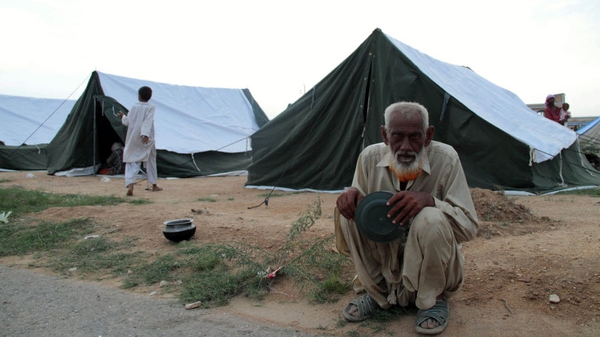