Aid agencies are saying that the world does not fully understand the scale of the flooding disaster in Pakistan.

One fifth of the country has been hit by severe flooding, with more than 20m people affected.

Bill Berger, USAID's Principal Regional Adviser to South Asia, said it has been difficult to communicate the scale of the disaster to the rest of the world.

The UN believes that up to 3.5m children are now at risk of contracting water-borne diseases in Pakistan.

Two weeks after the country's worst flooding crisis began, the Pakistani government has renewed its call for more assistance from the international community.

The World Bank has pledged $900m for long-term reconstruction projects, but so far less than one-third of the funds needed for emergency aid has been raised.

The UN has said that foreign governments have been slow to provide financial help amid concerns that the money will be redirected to the Taliban.

'If a person is hungry, if a person is thirsty and you provide water, he'll not ask whether you are a moderate or an extremist', Mr Qureshi told the BBC.

'He'll grab water from you and save himself and his children who were starved. So you have to be aware of this challenge.'

A UN statement issued in New York said the greatest threat was from acute watery diarrhoea and dysentery, but that hepatitis A and E and typhoid fever were also significant risks.

The first case of cholera has already been reported. 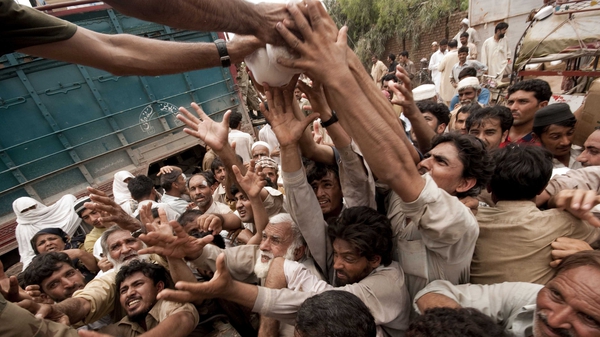