Bank of Scotland Ireland is set to wind down its remaining operations.

The company this morning told staff that a strategic review found there was no opportunity for growth in the Irish market.

Existing customers will not be affected by its decision, the bank has said.

Its plans to transfer its business currently carried on by BoSI to Bank of Scotland plc.

Today the bank announced that Bank of Scotland plc would enter into an agreement with an independent service company that would perform various administrative functions relating to the BoSI banking business.

Under this proposal, the 'majority' of BoSI employees, which numbers over 800, would transfer via Transfer of Undertakings (Protection of Employment) Regulations to the service company.

This in turn will be wound down over the coming number of years as the loan book shrinks.

A spokesman for the bank said there would be up to 36 compulsory redundancies.

The bank has already closed its 44 Halifax branches with the loss of 750 jobs.

It has emerged that the existing senior management team at BoSI has tendered to run the independent managed services company that will administer BoSI's operations in Ireland into the future.

The team, which would be led by current BoSI Chief Executive Joe Higgins, is thought to be the preferred bidders to win the contract. The team comprises six members of the current executive.

It is expected that Bank of Sotland plc will decide who wins the contract in the next couple of weeks.

The UNITE union, which represents staff at BoSI, has said workers 'are in shock following today's announcement'.

In a statement the union said that its members are having to 'come to terms with the fact that job security is now seriously compromised by what is in effect a long term winding down of the Irish operation'.

UNITE regional organiser Brian Gallagher said, 'Lloyds Bank may look upon this as a balance sheet exercise but the impact on workers who had pledged their future to the bank is devastating.

'The implications of today's announcement for our members and their careers are massive, and UNITE will consult widely with staff in the coming days before we go into discussion with management', he said.

Minister for Finance Brian Lenihan said that there had been too much lending in the Irish economy and said the cost for any foreign bank pulling out would be met by the shareholders of that bank.

The Irish Small & Medium Enterprises Association said it was concerned that the bank's closure would lead to a further deterioration in competition for lending.

BoSI has been in business for ten years and became heavily indebted because of its exposure to the property market.

It loaned €13.3bn for development and investment property in Ireland, €6bn of this was for property development.

In a presentation to analysts earlier this month Lloyds said 90% of this is now impaired.

Earlier this month the bank said that 44% of its entire loan book was classified as impaired.

Its loan losses in the first half of the year were €1.88bn.

The impairments are worse than Lloyd's had expected for 2010, and are a considerable deterioration from the 33% impairment rate at the end of 2009.

In a stock market note on 5 August Lloyds said that economic conditions 'continue to be monitored closely, particularly in Ireland'. 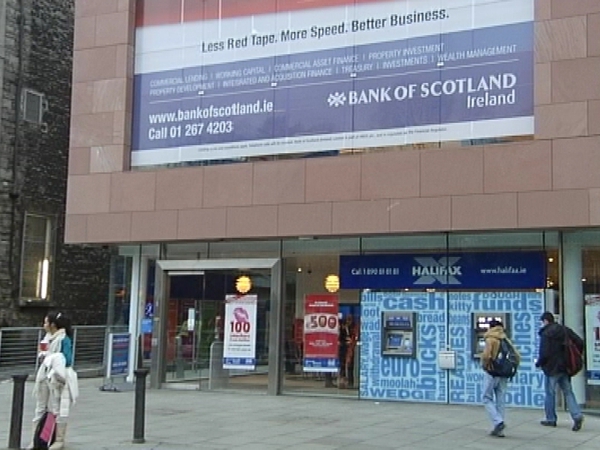 750 jobs to go at Bank of Scotland Ireland