The EU has announced a further €30m in emergency relief for the victims of the floods in Pakistan.

The sum brings to €70m the amount being donated by the EU.

EU Commissioner for Humanitarian Aid Kristalina Georgieva is travelling to the affected areas of Pakistan on Monday to meet relief experts and flood victims.

The UN has said that nearly half of the $459m needed for initial relief has been secured after days of lobbying donors and warnings that the country faces a spiralling humanitarian catastrophe.

'There has been an improvement in funding. Donors are realising the scale of the disaster,' UN spokesman Maurizio Giuliano told Reuters.

'But the challenges are absolutely massive and the floods are not over', he added.

About 6m people are deemed to be at risk of deadly water-borne diseases, with typhoid, hepatitis and cholera major concerns.

Islamabad has confirmed around 1,400 deaths, but World Health Organisation representatives suspect the toll is much higher.

The torrential monsoon floods have inflicted widespread damage on infrastructure, and in some cities destroyed electricity installations, roads and phone lines.

The World Bank expects the economic impact to be huge and said that direct damage was greatest in housing, roads, irrigation and agriculture. It also estimated crop loss at one $1bn. 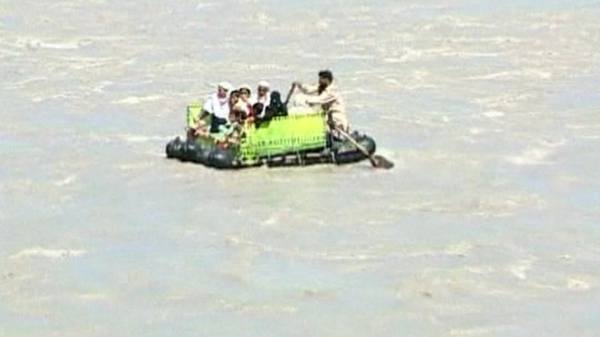