Irish aid agencies say they have received more than €2m in donations from the public in response to their Pakistan flood appeal.

Concern says it has received just over €1m, while Trócaire has collected around €700,000.

Pakistan's Ambassador to Ireland has thanked the public for their generosity, but has warned that up to 7m people still urgently need food aid.

Naghmana A Hashmi told RTÉ News that a second wave of flooding caused by heavy rains in the northwest of the country could leave 20m people in need of humanitarian assistance.

She also said that some of the country's most fertile land had been affected by the floods, and some areas may not be able to support crops for three years.

The floods in Pakistan may have destroyed crops worth around $1bn.

Disaster management officials are warning that flood-water levels are expected to rise dangerously today along parts of the already swollen Indus river in Punjab and Sindh provinces.

A Pakistani spokesman said this could mean further devastation and more people being added to the estimated 14m who are already affected by the unprecedented flooding.

The UN has said it is increasingly worried about the spread of water-borne diseases.

World Bank President Robert Zoellick has said that the organisation is considering redirecting aid to the country.

'The rough estimate is that there is a billion dollars of losses of crops. All of us will have to pitch in to help.'

Mr Zoellick said he had word that a reconstruction needs assessment team had landed in Pakistan with representatives from the World Bank and the Asian Development Bank.

UN Secretary-General Ban Ki-moon is to fly into Pakistan tomorrow to visit areas devastated by the floods and speed up relief efforts to contain the country's worst humanitarian crisis.

Pakistani President Asif Ali Zardari has attempted to fend off anger at his response to the floods, which have left at least 1,600 people dead.

Mr Zardari visited a hard-hit area for the first time yesterday and handed out aid to survivors.

He came under fire from victims and the opposition for failing to cut short a trip to Europe to deal personally with what is now the country's worst humanitarian crisis.

Mr Zardari visited Sukkur in the densely populated southern province of Sindh and was briefed about the damage and relief effort there.

He defended his decision not to cut short his overseas tour, saying he used talks in London and Paris to drum up much-needed aid.

The president told flood victims that the government was doing all it could to help survivors.

The Pakistani government has denied accusations that the ruling party has been censoring some of the strong criticism being made about the administration's handling of the crisis.

Pakistan's leading independent news organisation, GOTV, has suggested that the party cut its cable link to the city of Karachi and the surrounding area in Sindh province for political reasons.

Pakistan has said that 15-20m people face direct or indirect harm from the floods.

The UN believes 1,600 people have died, while Islamabad has confirmed 1,343 deaths.

The UN has appealed for $460m in foreign aid and says billions will be needed in the long term.

US Senator John Kerry will visit Pakistan next week to raise US public awareness and get donations, an official said as Washington increased its contribution to the relief effort by $21m.

'This will be a critical visit to help raise the profile among publics both in the US and internationally,' said Dan Feldman, the US deputy special envoy for Afghanistan and Pakistan.

Mr Kerry, who chairs the Senate's Foreign Relations Committee, will be the first senior US politician to visit since the disaster. 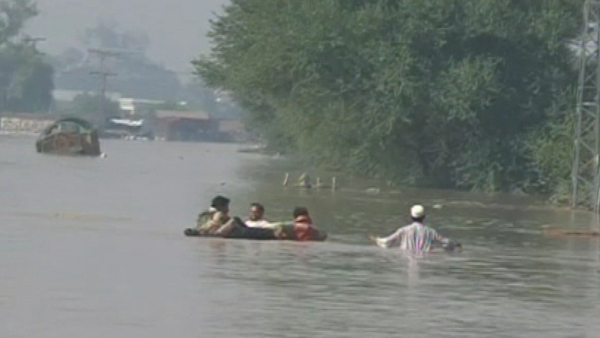