The Irish Aviation Authority says some flights are expected to operate out of Irish airports tomorrow.

The IAA has said some flights will start to operate from 5am tomorrow, but the authority is stressing that it won't be a return to full service.

Earlier, IAA Chief Executive Eamon Brennan, said he doesn't expect flights to return to normal until Friday, due to the scale of the backlogs and the dispersal of aircraft and airline crews.

Authorities are stressing that the restrictions are being lifted on a temporary basis initially.

The move came as EU transport ministers came to an agreement to reduce the size of a no-fly zone around the Icelandic volcano which has caused disruption to air travel for millions of passengers.

Research agencies in the UK and Germany have found six different layers of ash during test flights, according to Gerald Fleming of Met Eireann. Mr Fleming said there will be a significant decrease in the ash content over Ireland and the UK tomorrow, but he said whether that will allow flights to resume is not yet known.

Weather changes at the weekend may enable flights restrictions in Ireland and other parts of the EU to be reduced, according to Met Eireann.

Met Eireann has said it is likely in the coming days that ash may fall in Ireland and may be visible when it falls. Gerald Fleming said the ash will be very fine and very slight.

Govt looks for space on boats

Taoiseach Brian Cowen has said the Government is holding talks with ferry and shipping companies to review the capacities available to get bring back Irish residents who are stranded abroad.

Speaking in Tullamore this morning, Mr Cowen said that while the Irish Government did not have the sort of capacity that is available to the British counterparts through their Royal Navy, discussions were taking place with shipping companies to see if additional vessels or additional capacity could be made available.

Mr Cowen said that even though over 95% of the goods exported from this country go by sea, the fate of the remainder who rely heavily on air travel is obviously of major concern, particularly as the situation drags on.

Meanwhile, a nationwide train strike in France is compounding travel woes, with just one in two high-speed trains running.

There is widespread disruption throughout the regional rail system also. Some travellers have reported difficulty crossing the border from Spain into France because of the strike.

The Irish Exporters' Association has said that €95m worth of exports were being held up every day by the continuing air restrictions.

However, he said valuable exports to the US and Asia were being seriously disrupted.

British airlines and travel companies are losing tens of millions of euros a day from Europe's airspace paralysis, increasing the pressure on officials to give the all-clear for planes to fly again.

The closure of most of Europe's airspace has cost Britain's airlines well over €113.63m so far, analysts say.

‘I think this is costing British Airways somewhere in the region of £20m a day in revenues and about half that on a profit level because they won't have to be paying fuel costs, route charges or handling fees,’ said Davy Stockbrokers analyst Stephen Furlong.

‘It will be less for budget carrier airlines because their bottom line is less and they have lower fixed costs but there's no real end is sight.’

Low cost airline easyJet, which has cancelled all flights in affected areas until Tuesday afternoon, is losing around £7m a day in passenger revenues.

Europe's biggest travel firm TUI Travel said the crisis had so far cost it around £20m in lost revenues and that its estimated daily costs would run at £5 to £6m thereafter.

The group said it was working with other tour operators and airlines to ensure that both regulatory authorities and governments across its source markets permit the resumption of flights as soon as possible.

KBC Peel Hunt analyst Nick Batram said the cost for rival travel firm Thomas Cook is likely to be similar, adding that the impact on summer bookings is a concern.

‘My concern is who is going to go out and book a summer holiday now? Scenes of empty airports and stories of the volcano eruption potentially lasting years are unlikely to stimulate consumers into booking,’ he said.

The fallout has hit airlines' and travel companies' shares.

TUI Travel said that yesterday it had about 100,000 customers who were due to have returned home from holiday and that, in the UK, 90% of customers who had been due to go on holiday but whose flights were cancelled had chosen to re-book for a later date. 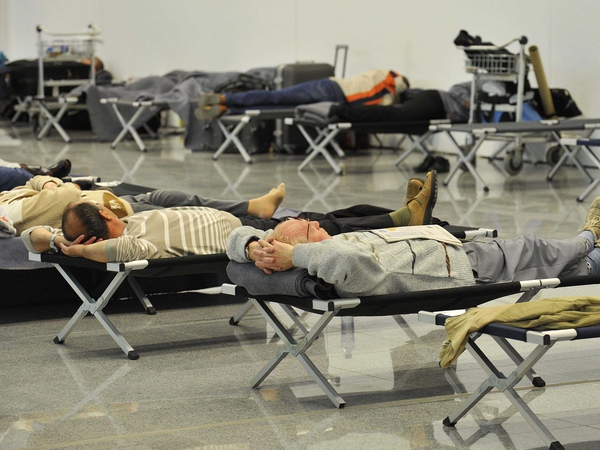