Bank of Ireland shares closed down 6.2% this evening, after the State was allocated 184 million shares in the bank worth €250m.

Last year the State invested €3.5bn in the financial institution as part of its rescue of the banking system. In return, the bank was to pay an annual dividend of 8%, worth €0.25 billion.

But the EU blocked banks in receipt of State aid from making such payments.

The bank had to give the Government shares instead - although the State had hoped to get cash.

Speaking to RTÉ News this morning, Minister for Finance Brian Lenihan said that while not the first option, shares had been part of the negotiations of a rescue plan for the bank.

Minister Lenihan also said he would be reluctant to nationalise the banks, but that this country needs a viable banking system.

Meanwhile, the Governor of the Central Bank has described the State take-up of Bank of Ireland shares as an 'untidiness' in the choreography of the restructuring of the balance sheets of the financial institutions.

Speaking at a meeting of the British-Irish Parliamentary Assembly in Cavan, Patrick Honohan said NAMA was returning 'fair and honest' valuations of the loan books of the banks under its aegis and in time they would definitely require more capital.

Without recapitalisation, NAMA would not work he warned.

The Agency would in time deliver the goods he predicted, but people should be measured in terms of what it could deliver.

Meanwhile, speaking on RTÉ Radio, Richard Bruton Fine Gael's spokesman on finance claimed that the Government's strategy on rescuing the banking sector was in tatters and that good enterprise projects were still being starved of credit.

Earlier, the former chief executive of Bank of Ireland, Mike Soden, said that the bank could generate a considerable amount of money if it sold its payments system.

The bank's payments system is the infrastructure over which bank customers are charged for processing cheques and using bank cards, which Mr Soden says generates significant cash flow each year and would be worth a substantial sum of money.

Its biggest owners are Bank of Ireland and AIB, with the smaller banks having a smaller holding.

Speaking on RTÉ Radio News at One, Mr Soden said the likelihood of either foreign or domestic investors taking a stake in the bank is remote while the prospect remains of the Government's shareholding getting bigger.

He said it was unfortunate the bank could not pay its dividend, and predicted that the government will end up with a majority shareholding in the bank. 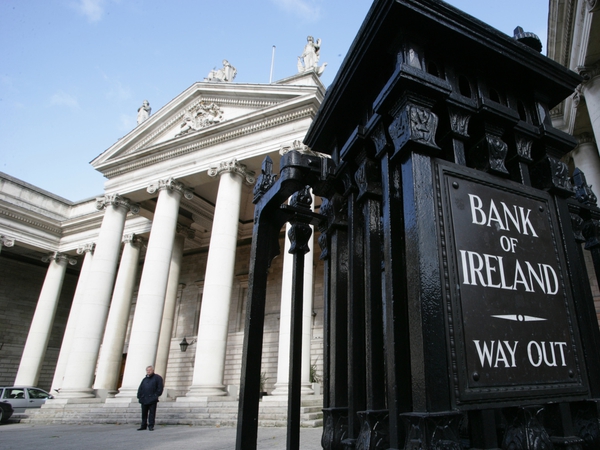