Taliban militants blew up a girls' school this morning in northwest Pakistan, the latest in a wave of attacks by Islamist extremists targeting educational institutions, a minister said.

No one was hurt in the attack, which took place in the village of Huwaid, 8km north of the town of Bannu.

'The explosive material was planted at three different places in the girls' primary school, which completely destroyed five out of seven rooms of the building,' provincial education minister Sardar Hussain Babak said.

He blamed the attack on Taliban, saying they are 'opposed to girls' education'.

No one was injured in the explosion because it happened at 6am.

Pakistan's military is engaged in offensives against Islamist fighters across much of the northwest including tribal areas bordering Afghanistan, a region branded by Washington the most dangerous place on Earth.

About 30,000 Pakistani troops poured into South Waziristan in mid-October to try and dismantle strongholds of the Taliban leadership, enraging militants who have responded with a surge of bomb blasts and attacks.

Most shops in the sprawling city of 18m people are closed and public transport is off the roads as several thousand mourners attend funerals of some of the victims of the two bombs, which wounded 170 people.

The first attack on Friday targeted Shias travelling in a bus to a religious procession, followed hours later by a blast at a hospital where the wounded were being treated.

Pakistani Taliban have carried out waves of bombings at crowded markets and army and police facilities since October, killing hundreds of people in a bid to topple the pro-American government of unpopular President Asif Ali Zardari. 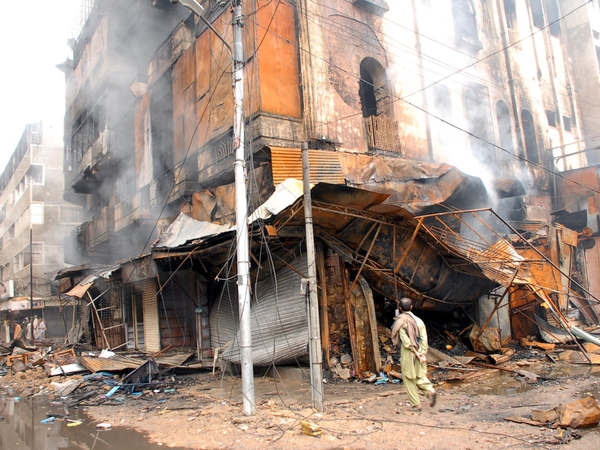