UN Secretary-General Ban Ki-moon has described the situation in earthquake-devastated Haiti as the worst humanitarian crisis in decades.

Ban arrived in Port au Prince earlier today to survey the devastated quake-hit capital for himself and meet with President Rene Preval.

The World Health Organization is estimating that between 40,000 and 50,000 people have been killed in the quake.

Relief workers say humanitarian aid is beginning to reach survivors of Tuesday's massive earthquake in Port-au-Prince, although the situation elsewhere in the country remains critical.

They say large stockpiles of food and medicine are still at the airport, which is under temporary American control.

There have been reports that police have fired on looters in a market in the city centre and that at least one person was killed.

Rescue teams in the city are still searching for survivors - at least three people were pulled alive from the wreckage of houses today.

World leaders have stepped up to pledge aid to rebuild, but survivors are still waiting for food, water and medicine.

EU nations are set to announce €100 million in funds to rebuild Haiti on top of emergency aid and call for an international conference to back the effort, according to EU officials.

EU foreign policy chief Catherine Ashton said: ‘The whole of the world has to make a commitment to Haiti for the future and for the long term. Part of the reason for the meeting tomorrow is beginning to put the building blocks in place.’

Haiti's Interior Minister Paul Antoine Bien-Aime said the final death toll will likely be between 100,000 and 200,000.

Thousands of Haitians are waiting for help, while others are leaving the city on foot or jammed in cars to find food and shelter in the countryside, and flee aftershocks and violence.

Many others crowded the airport hoping to get on planes that left packed with Haitians.

US President Barack Obama has promised help is on its way.

‘We're moving forward with one of the largest relief efforts in our history to save lives and deliver relief,’ Mr Obama said, flanked at the White House by predecessors George W Bush and Bill Clinton.

Mr Clinton, the UN special envoy to Haiti, will travel to Haiti on Monday to deliver relief supplies and meet with leaders and survivors, his foundation said.

Haiti is the Western Hemisphere's poorest country. Around 9,000 UN peacekeepers have provided security since a 2004 uprising ousted the then president Jean-Bertrand Aristide.

The UN mission responsible for security in Haiti lost at least 40 of its members when its headquarters collapsed.

The mission's chief, Hedi Annabi of Tunisia, his deputy Luiz Carlos da Costa of Brazil and UN police commissioner in Haiti, Doug Coates of Canada, have been confirmed dead.

Four days after the 7.0 magnitude quake, aftershocks were felt every few hours in the capital.

The quake destroyed the presidential palace and knocked out communications and power.

President Rene Preval is living and working from the judicial police headquarters.

Dozens of countries have sent planes with rescue teams, doctors, tents, food, medicine and other supplies, but faced a bottleneck at Port-au-Prince's small airport.

Air traffic control in Port-au-Prince, hampered by damage to the airport's tower, was taken over by the US military with backup from the aircraft carrier USS Carl Vinson, which arrived off Haiti on Friday.

US Navy helicopters are taking water and rations ashore and ferrying injured people to a field hospital near the airport. 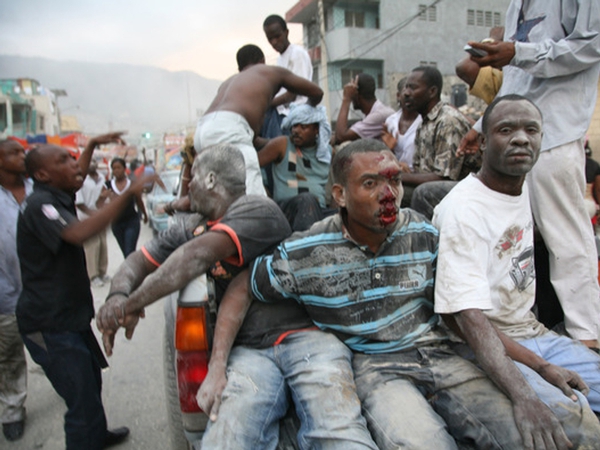