Mr Cowen said that the two governments do no contemplate failure in the current negotiations between the Democratic Unionist Party and Sinn Féin.

He was speaking in Downing Street after talks with Mr Brown that lasted about an hour.

Following their meeting they issued a joint statement on the talks.

Mr Cowen said in a news conference that the devolution legislation was already in place and that both governments believed that any issues between the parties remaining to be resolved were capable of being resolved.

Mr Brown added that the momentum of the talks between the parties was very positive and that he believed the early devolution of policing and justice was not only achievable but desirable.

The Taoiseach condemned the attempted murder last week of PSNI Constable Heffron as a wake up call on all on the island of Ireland.

He said the completion of devolution was the best way to answer the few who would wreck the stability of Northern Ireland.

This is the first face-to-face meeting between the two leaders since the eruption of the controversy over Peter Robinson's continuation as Northern Ireland's First Minister.

The crisis that has caused Mr Robinson to step aside as First Minister has led to a renewed focus in talks between the DUP and Sinn Féin.

However, the DUP is insisting other confidence building measures are needed before that devolution happens.

The DUP has said that discusssions the Sinn Féin party at Stormont have ended for the evening and will resume again tomorrow.

Sinn Féin President Adams confirmed this afternoon that the party's Ard Chomhairle will not go ahead until they have 'a more definite' report on the current talks. 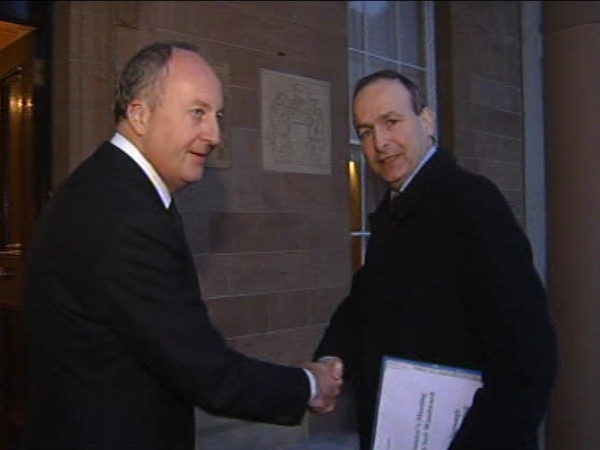