Gardaí have begun an examination of the ruins of St Mel's Cathedral in Longford which was destroyed by a fire on Christmas Eve.

Garda Inspector Joe McLoughiln said it is unclear how long it will take to conclude an investigation because of the size of the cathedral.

The investigation has been delayed until today because of fears that parts of the windows and walls at the northern end of the cathedral were unsafe and could collapse.

Gardaí are using a 60m-high crane with a safety cage to allow forensic experts examine the ruins.

They are unwilling to comment today on local speculation that the fire may have started in a boiler area at the back of the altar.

Father Tom Healy, administrator of the parish of Templemichael, said that arrangements were being made to stage weekend mass ceremonies at the sports hall in St Mel's College which could accommodate up to 600 people.

Fr Healy said it was hoped that at least some artefacts from a list of up to 500 included in a diocese museum that was destroyed in the cathedral fire may yet be recovered.

The most significant historical artefact that was burned in the fire was St Mel's Crosier which was over a 1,000 years old. 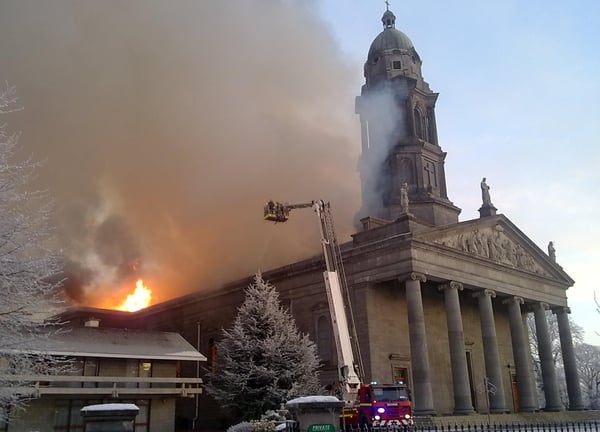