The Government has confirmed that further financial assistance will be made available to victims of the recent flooding.

Flood levels remain stable in the Lower Shannon River region and areas of Limerick City this evening, but parts of south Galway, north Clare and Offaly are still badly affected.

Speaking ahead of a special Cabinet meeting about the Budget this morning, ministers Dermot Ahern, Noel Dempsey, and Willie O'Dea said the €12m in financial assistance that was announced was always an initial figure.

Charities are reporting a huge response to appeals for aid for victims of the floods that are continuing to affect large parts of the West and Midlands.

The Irish Red Cross and the St Vincent de Paul Society have set up special funds for financial donations.

This weekend people can donate money to the Red Cross appeal at Superquinn and Vodafone shops across the country.

The St Vincent be Paul Society says people can donate money to its general fund or to specific accounts set up in Credit Unions in Ballinasloe and Athlone.

Meanwhile, Limerick County Council has confirmed that a precautionary boil notice is in operation.

Members of the public are requested to advise the County Council of elderly or disabled residents, who may require special assistance.

In Co Galway, residents of Clonfert have spent the night dealing with fresh flooding in the village.

Water levels have risen in the Ardrahan/Peterswell area as a result of heavy rain overnight.

As flooding continues to affect the midlands and mid-west, there is a warning that the next five days will be crucial for Limerick and areas around the lower Shannon.

It is estimated that between 500 and 600 families have been forced to evacuate their homes in the past week.

The Emmanuel House Of Prayer and several houses are under threat.

Farmers say they are fighting a losing battle

IFA Vice President for Connaght Michael Silke said they are fighting a losing battle and they need help.

The delivery of emergency fodder supplies to isolated farmhouses is expected to continue today.

In the Midwest the next five days are expected to be crucial for Limerick and areas around the Shannon region.

Yesterday the Chairman of the National Emergency Response Co-ordinating Committee Sean Hogan said the situation had somewhat stabilised but high tides are expected on the Shannon Estuary next week.

Water levels in County Offaly are still reported as high and have not subsided.

Local farmer, Tom Guinan from Shannon Harbour, Birr, Co Offaly said there has been ten inches of water in his house since last Saturday and it has worsened since last night.

He said tiles are now beginning to lift off the walls and there is likely to be no improvement for another three weeks because of the tides.

His neighbour Paddy Towey has 13 inches of water in his house. Both men have moved to temporary accommodation.

Fine Gael MEP Mairead McGuinness visited their homes this afternoon and said they are no longer habitable.

She said that although the levels of water had not risen, there has been no alleviation for people whose homes have been destroyed.

Meanwhile, flood levels are expected to remain stable today in the lower Shannon region and areas of Limerick city because of a number of factors.

Rainfall stopped overnight and it is forecast to remain dry today and tomorrow, and the ESB has confirmed that it will not be increasing the amount of water its releasing from the Parteen Weir at Ardnacrusha.

However high tides are forecast over the coming days peaking next Wednesday so many areas already affected like the villages of Castleconnell, Montpellier, Anacotty in the lower Shannon regions of Co Limerick and O Briensbridge and Clonlara in Co Clare remain on high flood alert.

Ennis is also on flood alert. Parts of North Clare and South Galway are still badly affected by flooding.

The crisis management team monitoring flood levels in Co Clare believe any clearing of floodwaters in North Clare, along with the high tides forecast will affect the water levels in Ennis in the early part of next week.

A section of the Gort Road - the main road from Ennis to Galway-has opened north of the town, but the main road between Ennis and Gort in Co Galway remains closed.

Tests are to be carried out by the HSE on Monday as to the cause of the discolouration of the water in affected areas, but its believed to have been caused by the exceptionally high rainfall and the flooding crisis. 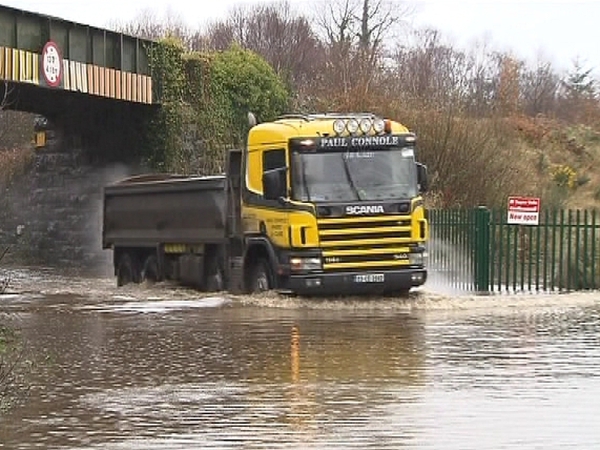