Farmers in the west, midlands and southwest are to be offered assistance if they have been affected by flooding.

A €2m scheme to help farmers who have lost animal fodder as a result of flooding is now in place.

Minister for Agriculture Brendan Smith has urged people in need to apply for aid without delay.

The Irish Farmers' Association has begun delivering emergency supplies of fodder to farmers in the worst hit areas.

The association said farmers living in other parts of Ireland have been sending truck loads of hay and silage to collection and distribution points that have been opened in Co Galway and Co Offaly.

According to the IFA, there has been a 'phenomenal response' to the plight of farmers who have found themselves and their animals marooned in the middle of vast tracts of floodwater.

The first of the fodder was distributed to farms in the Ardrahan area of Co Galway this morning. Many farms there can only be reached by boat or high-axle vehicles.

There is a fresh flood alert in Co Galway tonight in the village of Clonfert.

The Emmanuel House Of Prayer has been flooded and several nearby houses are under threat as a result of rising water levels in the nearby river Shannon.

The IFA's vice president for Connaght Michael Silke says the situation in Clonfert and nearby Meelick has become extremely serious and a large team of volunteer workers are trying to keep the flood water under control.

The ESB, meanwhile, has said it will not increase the amount of water it is releasing from Lough Derg through Parteen Weir into the Shannon.

It said that while the water level in the Lough rose by 1cm over the past 24 hours, the rate of increase is slowing.

The ESB said the rate of discharge would be at the same rate as yesterday and that, in general, flood levels downstream of Parteen Weir should not change.

Flooding conditions in the midwest are relatively stable and there have been no additional road closures or evacuations in counties Limerick and Clare.

Local authorities do not expect existing flood levels to recede today, but they also do not expect them to increase significantly.

Work to strengthen flood defences is ongoing with the distribution of sandbags in affected areas.

However, the chairperson of the national emergency response co-ordinating committee has said the next five days will be crucial for the lower Shannon area and Limerick with high tides expected on the Shannon Estuary next week.

Sean Hogan said it could take up to three weeks for normal water levels to return in the Shannon catchment area.

In south Roscommon, more than a 1km of road has been built up by council staff so that locals can access their homes.

The roads around Clonown have been built up by 1m in places in order to escape rising water levels on the Shannon.

In south Roscommon, more than a 1km of road has been built up by council staff so that locals can access their homes.

The roads around Clonown have been built up by 1m in places in order to escape rising water levels on the Shannon.

Cork City Council has begun to restore water to many areas of the city, but it has issued a boil notice for the areas that have had supplies returned.

In Athlone, water levels on the Shannon rose by between 1cm and 2cm overnight.

The Army is assisting locals who have been marooned by the flooding and several children were brought to school by the army. 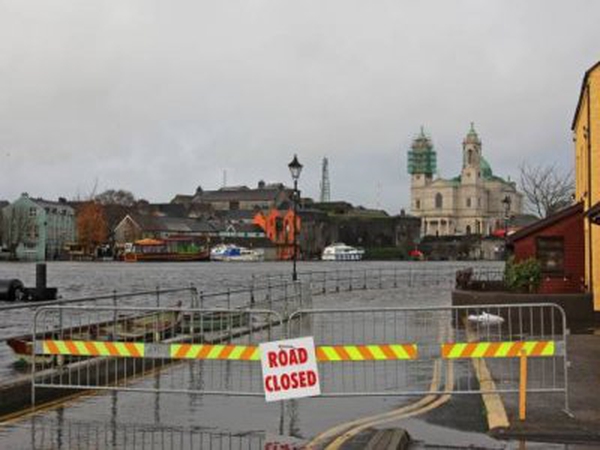