GOAL aid worker Sharon Commins has thanked the people of Sudan for their work to secure her release and that of her Ugandan colleague Hilda Kawuki.

Ms Commins and Ms Kawuki were released early this morning after being held captive for 107 days by an armed gang in the Darfur region of Sudan.

The Minister for Foreign Affairs, Micheál Martin, has confirmed that a Government jet will bring Ms Commins home from Khartoum tomorrow afternoon.

The release of the two women followed negotiations involving the Irish and Sudanese governments.

Both Sharon Commins and Hilda Kawuki are now in transit to Khartoum.

Ms Commins is expected to undergo medical checks and get some sleep before flying home tomorrow.

Minister Martin said she deserved a good night's rest before she begins her eagerly-awaited journey home.

He said humanitarian aid workers are extraordinary people who bring a lot of honour to our country.

He added that it is very important that everything possible is done to secure their release when they are held captive, but also to ensure the safety of other workers.

He said he would be consulting with overseas aid organisations and Irish Aid about the lessons to be learnt from the last few months.

Earlier, he said he was trilled and relieved when he heard of the pair's release. He paid tribute to their fortitude, and to their families, and he praised the work of his department as well as that of the gardaí and Defence Forces.

He once again stated that no ransom was paid and that the key factor in the workers' release was the pressure brought to bear by the chieftains and their own clans.

Ms Commins and Ms Kawuki released a statement saying that they could not wait to get home and spend time with their loved ones.

'We are naturally thrilled to be released after such a long period in captivity. We know it must have been a traumatic period for our families especially and for our friends.

In a statement, the Commins family said they were overjoyed with the news.

'We are delighted with this successful outcome and would like to sincerely thank the people of Ireland for their prayers and words of support, including the Islamic community,' they said.

The family thanked the Taoiseach, Brian Cowen, and Minister Martin for the time they dedicated to working on Miss Commins' release.

Hilda Kawuki's mother Ann said she received a call from Hilda to her home in Uganda at 1am to say she and Sharon Commins had been released.

She said Hilda didn't have much to say about her captivity or release, but that she was in high spirits.

Ann Kuwaki said she was very happy to hear the news. She said Hilda and Sharon were very tired because they were freed in the early hours of the morning.

The two aid workers' ordeal is the longest endured by foreign aid staff in Darfur since the conflict erupted in the western region in early 2003.

Until March, no aid worker had been held in Darfur for longer than 24 hours.

President Mary McAleese has also expressed her delight and relief at the release.

The President said: 'This is wonderful news for these women and their families. We can only begin to imagine what they have been through during their long weeks in captivity.'

GOAL CEO John O'Shea said: 'A sense of overwhelming relief and joy has descended upon all of us. We are especially happy and pleased for the families of both Hilda and Sharon who have suffered so much.' 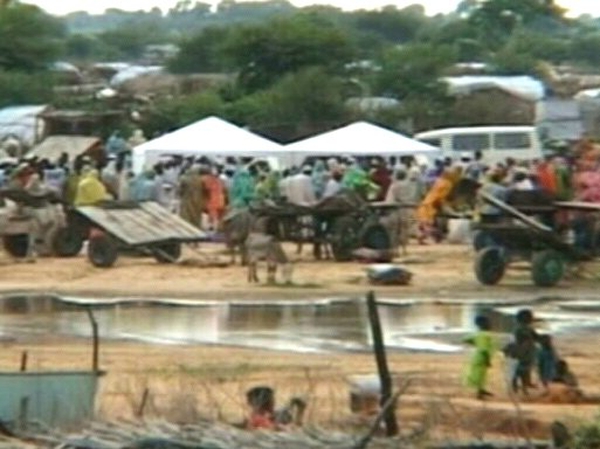