The Green Party has overwhelmingly endorsed the new Programme for Government, and rejected a motion calling on the party to oppose the NAMA legislation in the Dáil.

Read the proposed Programme for Government

84% of Green Party members voted in favour of the new Programme, which party leader John Gormley described as 'transformational in nature'.

More surprising was the margin rejecting a motion calling on the parliamentary party to vote against NAMA legislation in the Dáil - only 31% supported this motion.

Party leader John Gormley welcomed what he called an ‘overwhelming endorsement’ of the parliamentary party.

Mr Gormley said the Programme would deal with the problems besetting the country, like planning corruption and political reform - with an end to corporate donations.

Mr Gormley also said that because members had endorsed the Programme and because of the continued Green presence in Government, he would ‘fly the flag’ at the Copenhagen climate change summit.

On NAMA, Mr Gormley thanked those in the party who had put forward cohesive arguments against the Government's approach.

He said the result of the debate within the party was that we would get better legislation and said the Greens would do their job and protect the Irish taxpayer.

Meanwhile, the Taoiseach has said he is confident the revised Programme for Government will serve the country well.

In a statement, Mr Cowen said the Government was adapting to new realities and the agreement would direct and inspire its efforts in dealing with both national and international issues.

He said the document would be presented to the Fianna Fáil Parliamentary Party for consideration next week.

The Fine Gael leader said the Irish taxpayer would pay for the decision made by the Green Party.

Enda Kenny said the decision taken by Green Party members was due to a fear of the electorate and ‘sense of desperation”.

He described today’s outcome as ‘a sticking plaster solution over a festering boil that is this most incompetent Government in Irish history.’

Labour's Joan Burton said it was surprising the Greens had been prepared to settle for so little - she said many elements of the new Programme were either in the original programme two years ago, or had already been promised by various ministers.

Sinn Féin’s Caoimhghín Ó Caoláin described the decision as a missed opportunity and said the Green Party was ‘terrified of the prospect of a general election’.

The proposed Programme says the Government would not reintroduce third-level fees and it would employ an extra 500 teachers over the next three years.

On political reform, the two key Green Party demands have been met - a ban on corporate donations and the introduction of a system of vouched expenses for politicians.

As he arrived, Mr Gormley said that the changes in education were being backed by the teachers' unions.

The former Green Party leader Trevor Sargent said the deal that has been secured with Fianna Fáil is better than many people expected.

Speaking on his way into the Green Party conference, Mr Sargent said the deal secured last night was the culmination of eight days’ work.

Mr Sargent said it went right up against the wire because they really had to have a degree of change.

Around 50 members of Union of Students in Ireland gathered outside the RDS to urge Green Party members to vote in favour of the new Programme, while other protestors called on the Greens to pull out of Government.

Inside, the convention was disrupted at one point by a man calling on the Green Party leader to do something for his child who has special needs.

James McDonagh, from Dún Laoghaire, Co Dublin, said his daughter has not been in school for the past year because she has special needs and because of Government cutbacks.

Mr McDonagh claims the Government is failing his child and he is calling on Mr Gormley to pull out of Government today.

Earlier, Minister for Communications Eamon Ryan acknowledged that the vote for NAMA would be the more difficult to get through today.

Mr Ryan said he could rightly understand why people were concerned about the legislation to create a bad bank. 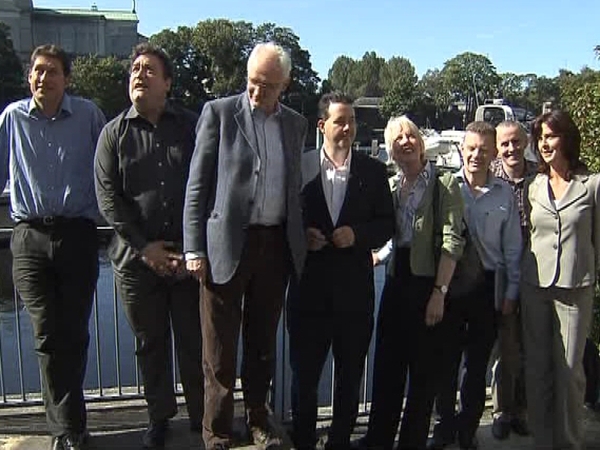