The two leading contenders for the Afghan presidency have both claimed victory.

The campaign teams for incumbent Hamid Karzai and ex-foreign minister Abdullah Abdullah both say they have won an outright victory.

This morning, Karzai spokesperson Deen Mohammad insisted President Karzai had a majority. 'We will not get to a second round. We have got a majority,' he said.

He said the estimate of victory was based on reports from nearly 29,000 monitors the campaign had at polling stations throughout the country.

However Mr Abdullah, the president's former foreign minister, dismissed the Karzai camp's victory claim and said preliminary results showed he was on track to win in the first round.

'I'm ahead. Initial results from the provinces show that I have more than 50% of the vote,' Mr Abdullah told Reuters.

Election officials stress no confirmed results have been released.

Much is likely to depend on turnout in southern areas, such as Mr Karzai's home province of Kandahar, where the president draws his strongest support but where voters faced the brunt of Taliban attacks and intimidation.

Millions of Afghans went to the polls yesterday, defying Taliban threats and sporadic attacks to choose a president amid worsening violence in only the second direct vote since the hardline Islamists were overthrown in late 2001.

Turnout was somewhere between 40 and 50%.

Officials breathed a sigh of relief after the relatively peaceful election day, which Taliban militants failed to disrupt despite sporadic attacks across the country.

Nine civilians and 14 members of the security forces were killed in a total of 135 incidents countrywide on polling day.

One election official was killed this morning after Taliban insurgents attacked a vehicle carrying boxes of ballot papers in northern Afghanistan - which they then set alight.

Rockets fell on towns, especially in the south and east, and two gunmen wearing suicide vests were killed in a gunbattle in Kabul.

The UN said the levels of violence were lower than expected. 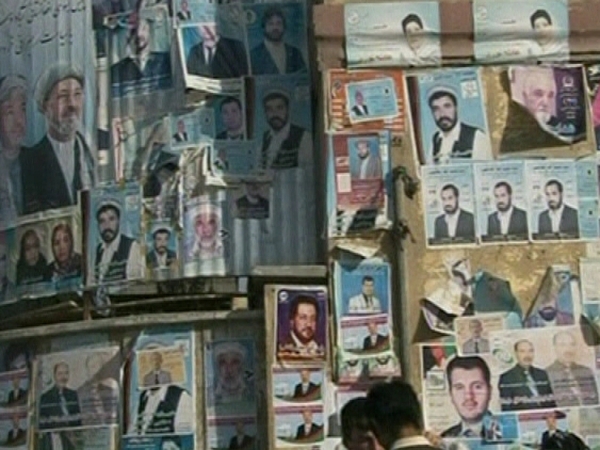