A total of eight people have been arrested on alleged public order charges following incidents near Glengad beach in Co Mayo.

Two men were arrested in Glengad at around 7pm yesterday evening after trucks used to collect stone from a quarry were damaged.

In the early hours of this morning, four men and two women were detained after allegations that they were trying to disrupt dredging work by a Shell dredger near Glengad.

They were arrested at around 4am.

Earlier, two men were rescued from a life raft in the sea off Co Mayo after their fishing vessel sank.

When their vessel, 'Iona Isle', began sinking, the two men got into their raft and issued a Mayday call to the Malin Head Coastguard at 4.30am.

Malin Head Coastguard received the call at the same time that 15 kayaks were moving towards the Shell dredger within 1km of the shoreline at Glengaad beach.

Two boats from the Garda Water Unit were dealing with this incident at the time the distress signal was received. The boats diverted and went in search of the sinking vessel.

The Coastguard put out a call to nearby vessels and the Rachel Mary vessel reached the Iona Isle first and took two crewmen aboard.

The men were taken to Ballyglass Pier and on to hospital in Castlebar as a precautionary measure.

Meanwhile, Shell to Sea protesters say the boat was boarded by four masked men in the early hours of this morning.

They said the crewmen - including prominent fishing rights activist Pat O'Donnell - were held in the wheelhouse of the vessel and allowed issue the Mayday call before the Iona Isle was deliberately sunk.

Shell issued a statement this afternoon saying it emphatically rejected any allegation that people employed on the Corrib Gas project were involved in any way in the incident which led to the sinking of the Iona Isle. 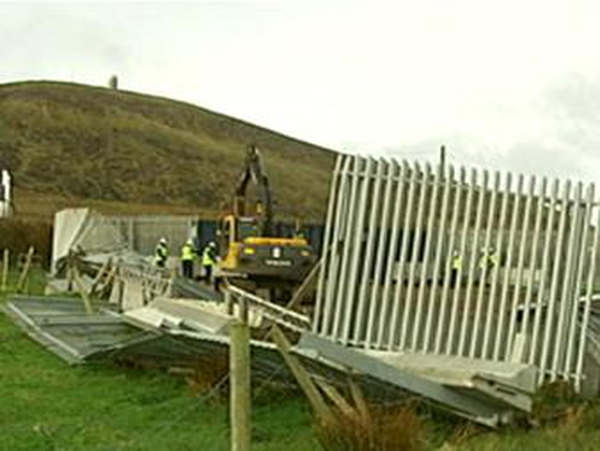