Department of Health Chief Medical Officer Dr Tony Holohan has confirmed that Ireland is currently dealing with only one case of swine flu.

At a HSE briefing this evening, Dr Holohan said there are now 1,124 cases of influenza A(H1N1) in 21 countries worldwide.

Currently there are 107 cases in 12 European countries, 17 of which are human to human contracted cases.

Dr Holohan said posters and information will continue to be distributed to public service locations.

2.5 million information leaflets have been printed in Ireland.

The HSE has received 1,000 calls to its information line and the HSE website recorded a 50% increase in hits over the weekend according to HSE Health Promotion chief Dr Kevin Kelleher.

Mexico, which has been worst affected by the outbreak of swine flu, has announced plans to revive its economy after the epidemic.

In a TV broadcast, Mexican President Felipe Calderon said the planned stimulus package would include a temporary reduction in taxes for cruise lines, in a bid to lure back foreign visitors.

He repeated government assurances that Mexico was over the worst of its own epidemic.

To date, 27 deaths have been confirmed - 26 in Mexico and one in the US. The flu's global spread has kept alive fears of a possible pandemic, although scientists say this strain does not appear more deadly than seasonal flu.

Fears of cross-border contagion stirred up international trade tension after about 20 nations banned imports of pigs, pork and other meat from the three most flu-affected countries.

Health experts, citing precedents such as the 1918 Spanish Flu pandemic that killed millions of people, warn the latest epidemic could attack more violently a few months from now.

In a brewing diplomatic dispute between Mexico and China over the treatment of Mexican citizens caught up in the flu alert, Mexico sent a plane to retrieve dozens of its nationals quarantined by Chinese authorities.

Health Minister Jose Angel Cordova said the government would lift the precautionary five-day shutdown it had imposed on public and business activities on 1 May.

Mexican schools will remain closed until 11 May and only reopen after cleaning and amid tight health screening.

With infections of the new flu strain cropping up across the globe, the World Health Organisation has wavered over whether it might declare a full pandemic alert.

WHO chief Margaret Chan said the apparent good news from Mexico over the epidemic had to be treated with caution.

Before issuing a level 6 pandemic alert, WHO would need to see the virus spreading within communities in Europe or Asia.

In the US, the second-biggest focus of infection after Mexico, the new virus has now infected 286 people in 36 states, the US Centers for Disease Control and Prevention said.

So far 99% of probable US cases have, upon further testing, turned out to be the influenza A(H1N1) strain. 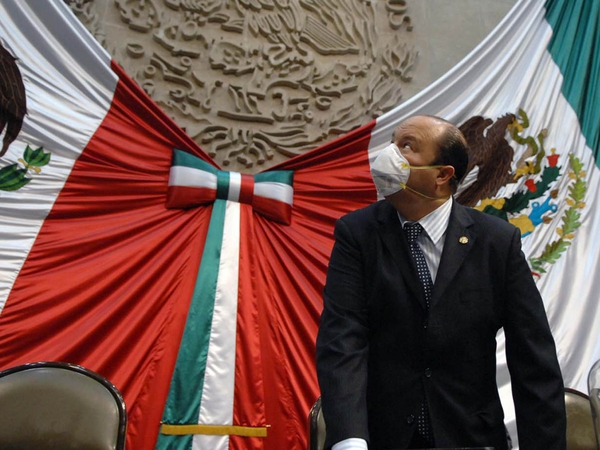