Director-General Margaret Chan made the announcement at a press briefing about the swine flu outbreak at the WHO's Geneva headquarters.

The alert has been raised as the virus spread to the US, Canada, Europe, Israel, and New Zealand.

According to the WHO's pandemic flu response guidelines, a phase five alert is called when there is human-to-human spread of virus in at least two countries in one region.

Ms Chan's move to raise the panedemic level follows intensive consultations with experts and analysis of the spreading virus within and from Mexico.

Meanwhile, a 23-month-old Mexican child has died of swine flu in the US state of Texas.

It is the first confirmed death outside Mexico.

US officials said the toddler's family had crossed the border for treatment.

And about 30 US Marines in southern California on the biggest military base in the United States have been quarantined after one of them was confirmed to have contracted the swine flu virus.

The case was identified at the 29 Palms Marine Corps Air Ground Combat Center and was confirmed by the US.Centers for Disease Control, the base said in a statement.

The base houses 8,000 active-duty Marines and is the primary training center for Marines and sailors deploying to Iraq and Afghanistan.

159 people are believed to have died from swine flu in Mexico though the number confirmed by strict laboratory tests is just seven.

More than 1,600 people have been infected in Mexico.

Elsewhere, three cases of swine flu have now been confirmed in Germany.

All three have recently returned from Mexico.

The news came as the New Zealand government gave itself sweeping powers to deal with the outbreak, including placing people under compulsory quarantine.

Officials said another 31 possible cases were being investigated and that 179 people were in isolation.

In Australia, where 90 people are being tested, the government has introduced new powers to detain and isolate suspected sufferers.

Following earlier advice from the US, the EU and Canada that citizens should avoid non-essential travel to Mexico, Cuba and Argentina have suspended flights there, while Carnival Cruise Lines and Royal Caribbean Cruises Ltd said they were temporarily suspending port calls in the country.

Notices were being put in place at Irish ports and airports this morning offering advice to people returning from countries affected by the swine flu virus. 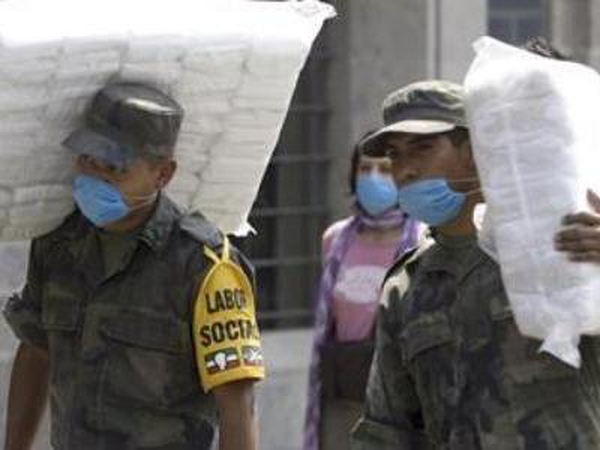