The Real IRA has claimed responsibility for last night's attack in which two British soldiers were shot dead in Co Antrim.

It is understood the dissident republican group made a phone call to a journalist in the Sunday Tribune newspaper and used a recognised codename.

The two soldiers were shot dead and four other people seriously injured during the attack on a British Army base in Antrim town.

The shooting occurred shortly before 10pm as pizzas from a local business were being delivered.

During two long bursts of gunfire, the two soldiers in their 20s were shot dead and four people, including two civilians, were seriously injured.

The PSNI has confirmed that two of the men injured were the employees of a pizza delivery company.

One man has been named locally as 19-year-old Anthony Watson. His condition has been described as serious. The condition of the second man, a 32-year-old Polish national is said to be critical.

The other two injured men were British soldiers at the base.

The gunmen made off as a fleet of ambulances rushed to the scene.

Chief Superintendent Derek Williamson said: 'I have no doubt in my mind this was an attempt at mass murder.

'Last night two very young men lost their lives in a very callous and a very ruthless attack by terrorists who have no thought and had no thought last night for anyone who was in the vicinity.

'It's clear from what we know at this stage that the terrorists not only wanted to kill soldiers who were there last night, but also tried to kill those two pizza delivery men.

'The gunmen, having fired an initial volley of shots, moved forward when people were on the ground and fired additional shots at those people on the ground.'

Police are understood to be examining a car found abandoned in the nearby town of Randalstown. Officers are trying to establish whether the vehicle was used in the shooting.

The Irish and British governments have affirmed their commitment that the will of the people will be upheld in Northern Ireland.

Taoiseach Brian Cowen condemned the attack and conveyed by phone a message of sympathy over the deaths to the British Prime Minister.

Gordon Brown described the attack as ‘evil’ and said ‘no murderer’ would derail the peace process.

PSNI Chief Constable Hugh Orde insisted there were no plans to increase the number of special forces in Northern Ireland.

Meanwhile, hundreds of people walked silently to the edge of the police cordon earlier today and stood together amid the floral tributes.

Massereene Barracks is the Northern Ireland headquarters of the British Army's engineering division.

Since the Good Friday Agreement, the number of soldiers there has been reduced and the base is due to be closed next year.

Dissident republican groups carried out gun attacks on police officers in Derry and Dungannon last year and they have repeatedly said they want to kill PSNI members.

It is 12 years since Lance Bombadier Stephen Restorick was shot in the back while manning a British Army patrol in Beesbrook, Co Armagh.

Until last night, he was the last British soldier killed in Northern Ireland.

There has been widespread condemnation of the killings.

British Prime Minister Gordon Brown (below) insisted that the killings would not derail the peace process.

'I can assure you that we will bring these people to justice,' Mr Brown vowed in his first comments on the shootings.

'No murderer will be able to derail a peace process that has the support of the vast majority of the people of Northern Ireland and we will step up our efforts to make the peace process one that lasts and endures.'

The Taoiseach Brian Cowen said violence had been utterly rejected by the people of this island and a tiny evil group could not undermine the will of the people to live in peace together.

A spokesperson for the US State Department called on all parties in the North to unequivocally reject what he called such senseless acts of violence, whose intention was to destroy the peace that so many had worked hard to achieve.

Northern Secretary Shaun Woodward described the shooting as an 'act of criminal barbarism'.

Northern Ireland's First Minister Peter Robinson and Deputy First Minister Martin McGuinness were due to travel tomorrow to the US but have postponed their visit.

The DUP leader said the shootings were a 'terrible reminder of the events of the past'. 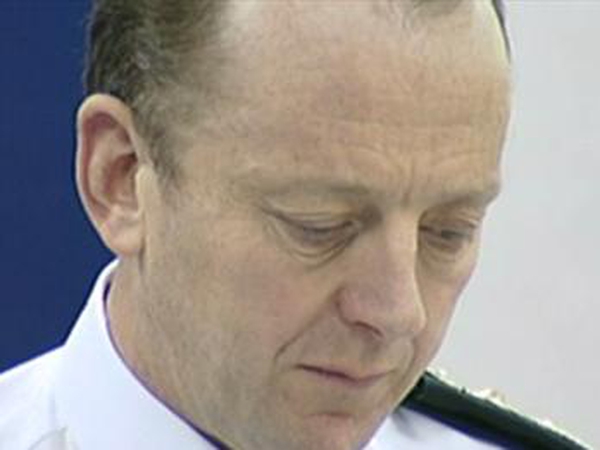