The Taoiseach faced questions about the economic crisis during Leaders' Questions in the Dáil this morning.

Fine Gael leader Enda Kenny said the Government had to stop dancing to the tune of banks and developers and he asked how much credit had been made available to small and medium enterprises.

Brian Cowen rejected any suggestion that the Government was motivated by anything other than the public good.

He said that banks were working on strategic plans that would make credit lines available.

The Taoiseach later said the country was facing the prospect of job losses totalling over 100,000 between now and the end of next year.

Opening a two-day debate on efforts to deal with the economic decline, Mr Cowen said national and international pressures had combined to damage the outlook.

These included the rapid collapse of the property market, the crisis in the banking sector, a drop in exports and the increasing strength of the euro.

Mr Cowen said the outlook for the public finances was uncertain but without appropriate and urgent measures the problems could run to 2013.

On the plan to save €2bn this year, Mr Cowen said this was just the beginning of the effort to save money.

When the proceedings got under way, the Taoiseach said the problems had been caused by a combination of factors.

He also said there needed to be a new standard in the banking sector both nationally and internationally.

Earlier, Enda Kenny said the country was in an economic war for survival and he accused the Taoiseach of doing things his way only despite talk of seeking a national consensus for recovery.

The Taoiseach said Deputy Kenny had come out with his usual outburst and he defended his and the Government's approach to dealing with the crisis in the banking sector.

He told the Dáil that matters surrounding Sean Quinn's stake in Anglo Irish Bank may have to be investigated further by the Financial Regulator.

He said that the Minister for Finance was aware over the course of the last year that a large overhang of shares in Anglo were held by a particular investor and related persons and that this was considered by the bank and the market to be a source of instability and that the institution was seeking some resolution of this issue.

He said he found it difficult to believe that laws were not broken by management at the bank.

The Taoiseach said the Financial Regulator and the Director of Corporate Enforcement were looking into issues at the bank. 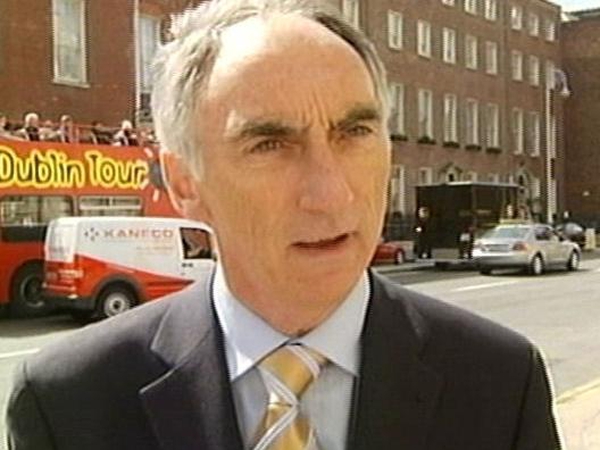