The Government and the social partners have held an intensive round of talks today on the Government's plans to cut public expenditure.

ICTU has said no details of the Governments plan to save €2bn were presented to them at a meeting with Government officials this evening.

A call from IBEC to have the National Wage Agreement deferred has caused difficulties in the process, according to David Begg of ICTU.

Mr Begg said this evening that Congress Executive Council is to meet to discuss the call on Monday.

Mr Begg had expected to get more detail from Government at the meeting today but said he expected no further developments over the weekend.

He said that despite two days of Cabinet meetings and discussion with the social partners today, he is none the wiser as to what the Government intends doing to reduce spending.

SIPTU President Jack O'Connor has said finding a workable solution to the economic crisis is dependent on the better off in Ireland making a contribution.

Mr O'Connor said if trying to recoup funds was about working class people carrying the burden, then it would make the recovery process difficult.

Yesterday, the Cabinet agreed a range of options for reducing spending this year by up to €2bn.

It came after two days of intense discussion around the Cabinet table, with ministers going through every aspect of Government spending.

Speaking in Derry this morning, the Taoiseach said there is a process of discussion going on in relation to the economic situation.

He said it is a question of continuing the engagement with all the social partners and seeing what way we can all move on together.

He said the Government had decided that January would be used to see how the social process partnership model that has served Ireland so well might be used to help manage our way through the recession.

He said the Government currently has day to day expenditure of €55bn and tax revenues of €37bn and a process of retrenchment and reform was needed in the interests of sustaining services for the future and to let international markets see a determination to manage the current situation.

IBEC Director General Turlough O'Sullivan said the current economic crisis needs a three-pronged approach, saying the state of the public finances, the stabilisation of the banks and the problem of costs in the enterprise sector remains the key issues.

On his way in to the talks, Mr O'Sullivan said the weakening sterling situation and the high costs of production here in comparison with near neighbours is a serious issue.

He said described the Government's work with regards to the stabilisation of the banking sector as 'good'.

Elsewhere, IFA president Padraig Walshe has called for a 20% cut in the cost base to stabilise the Irish economy.

Mr Walshe said immediate action to restore the competitiveness in export-led sectors was just as critical as dealing with the public finances in the current economic crisis.

He said all the indicators pointed to a minimum 20% cut in costs, including labour costs, to prevent massive job losses and the transfer of our food manufacturing industry to the UK.

Hard bargaining can be expected to continue over the weekend. Cabinet is expected to sign off on the final package next week - whether or not consensus has been reached in those talks. 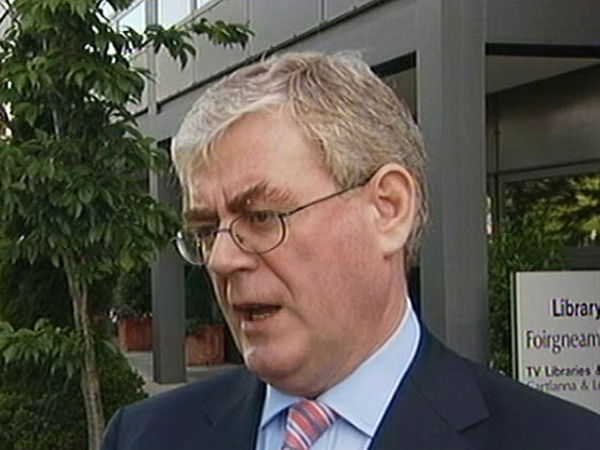