Barack Hussein Obama has been sworn in as the 44th president of the United States, making history before a sea of people in Washington DC.

Look at photos from the inauguration and read RTÉ.ie's exclusive Inauguration Blog

Mr Obama took the oath of office from Chief Justice John Roberts, resting his hand on the bible used to swear in Abraham Lincoln in 1861. He then raised his right hand to deliver the words that formally made him the successor to George W Bush.

Roars of approval erupted from the watching thousands as he repeated the oath.

Later, the US president and the first lady, Michelle, entered the presidential motorcade taking them down the inaugural parade route to their new home at the White House.

After reviewing soldiers marching past the Capitol building, the Obamas stepped into the new, armoured presidential limousine and began a slow-roll motorcade towards 1600 Pennsylvania Avenue.

They then emerged from the car and walked down Pennsylvania Avenue waving to the gathered crowd.

Earlier, President Barack Obama had addressed a huge crowd, telling them he was 'humbled by the task before us, grateful for the trust you have bestowed, mindful of the sacrifices borne by our ancestors.'

Dispatching quickly with pleasantries, Mr Obama turned to the task at hand and sought to temper the soaring optimism about his leadership with reality.

'Today I say to you that the challenges we face are real,' the President told the crowd. 'They are serious and they are many. They will not be met easily or in a short span of time. But know this, America - they will be met.'

Hundreds of thousands of people, bundled up against the cold and in a festive mood, had packed Washington's Mall since early this morning.

Some estimates put the number of people packing the Mall and inaugural parade route at more than two million.

Turning to crowds stretching way into the distance, Mr Obama cited the worst economic conditions in 70 years and US involvement in wars in Iraq and Afghanistan as having placed the country 'in the midst of crisis.'

'On this day, we gather because we have chosen hope over fear, unity of purpose over conflict and discord,' he said.

He offered conciliatory words to Muslims, while at the same time issuing a warning to those who would wage terrorism.

In a message to the Muslim world, President Obama said he would seek a 'new way forward' based on mutual interest and mutual respect.

In its first act of business, the Obama White House issued a proclamation declaring a national day of renewal and reconciliation and calling on Americans 'to serve one another'.

The inauguration took place amid unprecedented security. About 8,000 police were deployed and a total of 32,000 military personnel were on duty or on standby.

The US Homeland Security Department earlier said authorities had been investigating a potential threat of 'uncertain credibility' in connection with the inauguration.

During the inauguration lunch for Mr Obama, US Senator Edward Kennedy collapsed.

Mr Obama said at the start of his speech to the gathered US lawmakers: 'First of all, I know that while I was out of the room, concern was expressed about Teddy.

'I would be lying to you if I did not say that right now, a part of me is with him. And I think that's true for all of us.

'This is a joyous time. But it's also a sobering time. And my prayers are with him and his family and Vicki.'

Senator Kennedy was later reported to be awake, answering questions and being assessed.

The US Senate has begun confirming President Obama's Cabinet, but has put off a vote on the designee for secretary of state, Hillary Clinton.

It also approved Peter Orszag as head of the White House budget office.

However, Sen John Cornyn of Texas demanded a debate first regarding his concerns about foreign donations to a foundation created by Mrs Clinton's husband, former President Bill Clinton.

A vote on that nomination was scheduled for tomorrow.

When Barack Obama launched what he called his 'improbable quest' for the White House on the steps of the old state capitol in Springfield, Illinois, in February 2007, he was seen as the rank outsider.

Then, he was still just a little-known Chicago politician with a ready smile, who had wowed the 2004 Democratic convention with a dazzling speech.

'There is not a black America, and white America and Latino America and Asian America - there's the United States of America,' he proclaimed, bringing the convention to its feet.

The son of a Kenyan father and a white mother from Kansas, President Obama seems to be at ease in both worlds and indeed has sought to rise above the issue of race, to be a president who can unify all races.

In defying the odds to defeat Hillary Clinton in the bruising White House Democratic primaries, Mr Obama overturned the perception that America was not ready to vote for a black president.

And his afternoon in Washington DC, with a few short words carved from the US constitution, Barack Obama became the first African-American US president, capping a meteoric rise from obscurity to the Oval Office. 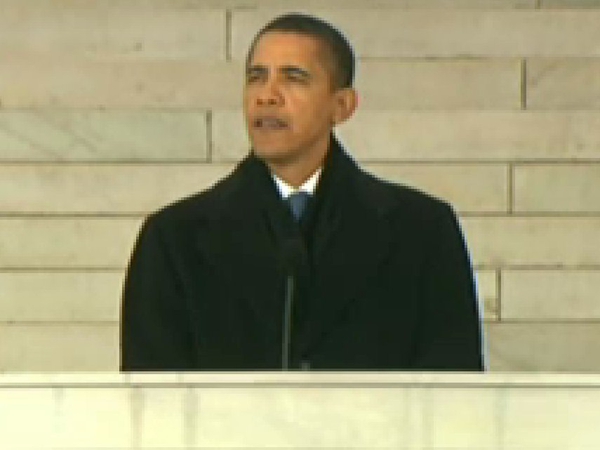